Major League Baseball has always been very strict about its content appearing on YouTube and other video streaming sites. Peruse YouTube for highlights from your favorite players and teams, and you’ll find it nearly impossible to find quality footage. As soon as a clip from a game goes up on YouTube, it’s taken down. Up until now, it’s just a collection of slideshows and footage uploaded from fans’ shaky hand-held cameras at the ballpark. Finally, Major League Baseball is stepping up its effort to tear down those walls.

Today on Google+, the company announced that MLB is finally bringing baseball to YouTube. While this is a significant partnership for YouTube, which continues to roll out new content initiatives and partnerships, don’t expect it to be fully baked quite yet.

Through its YouTube channel, MLB will begin offering game highlights from the current season, which will be uploaded 24 to 48 hours after the game. Not only that, but it will be offering classic fare, with thousands of hours of archived games going back to 1952, along with clips from “Baseball’s Best Classics” and “Best Moments.”

MLBAM first began putting full-game archives and highlights on its YouTube channel back in 2010, which were only available to viewers in Australia, Brazil, Japan, New Zealand and Russia. The new channel update will now bring that content to an even wider, global audience. However, it is missing a few key markets.

Under YouTube’s new partnership with MLB, viewers will be able to watch two live games per day during the regular season. For free. However, for baseball fans living in the U.S., Canada, South Korea, Taiwan and Japan, we have some bad news. No two-live-games-per day for you.

Naturally, it seems a little ill-conceived for the partnership to be announced without the ability to air in the U.S., Japan or South Korea, which happen to have two of the largest markets for baseball in the world. That being said, it’s a great start, and baseball fans will appreciate the ability to find highlights from their favorite players and teams on YouTube, just one click away from cute cat videos. 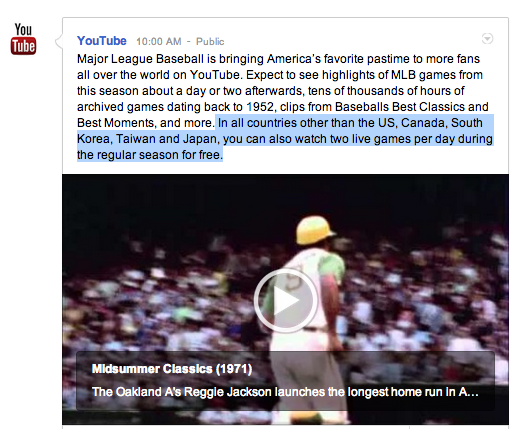