Floored scans office spaces, apartments and houses using 3D camera technology and proprietary software to build customizable 3D models for real estate purposes. At Disrupt NY 2013, the company launched the platform to create an immersive, interactive and user-friendly experience. Instead of static photos and floor plans, you can move around in real-time, add furniture and easily realize if the space is a good fit.

“The marketing in the commercial real estate industry is absolutely abysmal,” co-founder and CEO Dave Eisenberg said in a phone interview before Disrupt. “The two-dimensional floor plan has not evolved in decades.”

At first, Eisenberg was interested in 3D capturing and wanted to explore potential real-world applications. That’s when he discovered Matterport, a 3D device to capture interior spaces, and partnered with it to take advantage of Matterport’s existing hardware solutions. 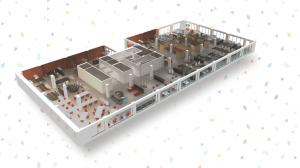 “Matterport is a pretty incredible technology company. They incorporated the Kinect into a device they built,” Eisenberg said. “It’s the first point-and-shoot solution to grab a 3D capture of your environment.” Matterport now works with Primesense, which manufactures the sensor inside the Kinect.

But Floored had to customize the device to their needs and develop a new software layer on top of Matterport’s existing capabilities. The two companies are tackling different pieces of the puzzle and have different clients in mind. Floored cleans up the data in-house and renders the result in real time for the web and its iPad app. The entire process currently takes 48 to 96 hours.

At Disrupt, Floored unveiled its next update, due later this year, with new features, such as the ability to change the lighting conditions in real time. Users will also be able to add furniture using a really simple 3D editing tool. “This is the number one most requested feature set,” Eisenberg said onstage. 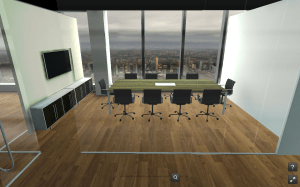 In addition to the technology achievement, Floored allows for nearly limitless customization possibilities. You can make changes to a space and see how it would look like. For example, Floored turned an empty retail space into a coffee shop. In addition to seeing a place in its current condition, you can see it in a new condition.

Floored showed the Disrupt crowd an impressive demo of the top floor of One World Trade Center. You can walk around and enjoy the view just like you will be able to do later this year.

The real estate industry is just a first step for Floored. “There’s so much cool stuff happening in the 3D ecosystem right now that we really feel that the moment for 3D applications has arrived,” Eisenberg said. “We’ve built our first application around real estate, but we’ll be tackling a lot of other areas.”

NB: Why did you decide to pick that vertical?
Answer: We have a very open filter. We picked real estate because it’s huge and this is probably the easiest thing that we could do.

RP: How long does it take to scan a place?
A: The townhouse that you saw was completely auto-generated. Over time, the overall time is going to get shorter.

TC: What are your technology challenges?
A: Out of our team of ten, we have nine engineers. This is a tech-oriented company. To go from a raw set of data to a clean-up space, it will be automated for 40 percent of our work.

RP: Will you create a database of spaces?
A: I’d love to do that. As the costs will go down and down, there will be a massive explosion of 3D data. Every time a lease opens up, we are doing a 3D scan.

TC: How do you get new data for decoration or a piece of furniture.
A: Every time we scan, we get data. We can do 3D models pretty quickly as well.

NB: How do you launch in new markets?
A: We haven’t done it yet. But it’s pretty easy to teach someone to use the camera.

RP: How much does the camera cost?
A: It will soon cost the price of a nice DSLR.