The daily deals hype around Groupon, LivingSocial and all of their clones has markedly cooled down over the last few months, but that isn’t stopping Microsoft from launching Bing Offers, a new local deals aggregator for the U.S. market, today. The odd thing about this launch is that Bing previously offered a very similar feature called Bing Deals since 2011 – a service that now seems to be gone.

As a Microsoft spokesperson told me, Bing Deals went through “a number of iterations” over the years, and Bing Offers is essentially the next version of Bing Deals. As far as I can see, Bing Deals’ emphasis was on aggregating the best deals from across the web. Bing Offers puts its focus more on local deals, but it also features a number of national offers, as well.

Bing Offers, the company says, will aggregate deals from “a broad set of partners, including many of the leading local deal providers.” Microsoft hasn’t made a full list of partners available, but I’m seeing offers from LivingSocial, Groupon (via Yipit), Spotted Fox, DoubleTakeDeals and a number of other smaller providers.

The service features the same kind of flat design that’s now the hallmark of most of Microsoft’s products and as a daily deals aggregator, it’s actually quite nice. You can browse offers by categories (food, activities, health and fitness, etc.) and, as Microsoft stresses, “the Bing Offers experience works seamlessly across tablets, mobile devices, and PCs, so you can access great deals regardless of where you are.” 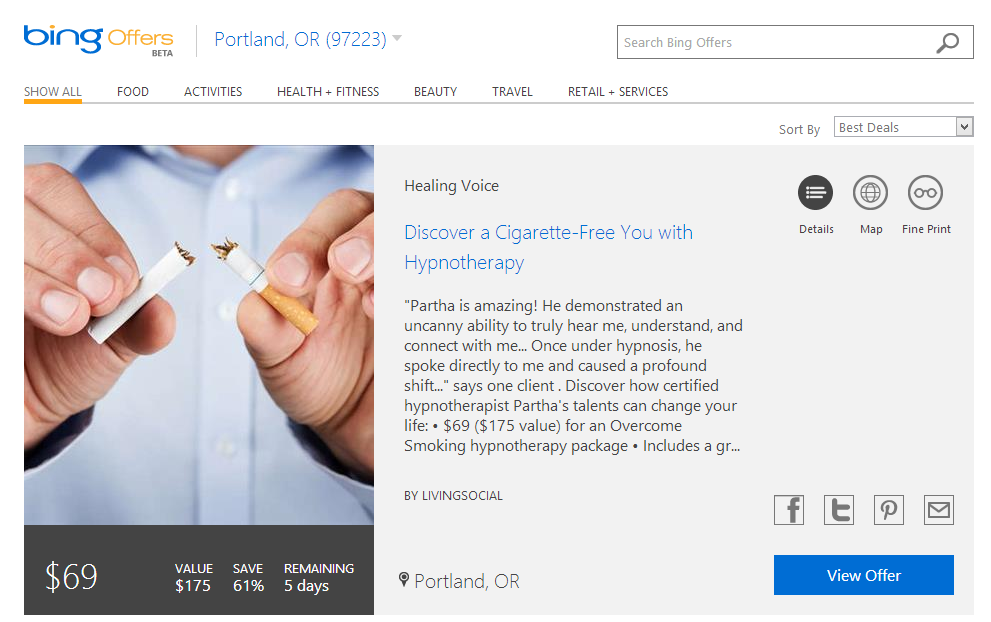