The U.K.’s BBC has launched an Android version of its iPlayer Radio app which lets U.K. users listen to BBC radio stations live or catch up on scheduled programmes they missed. Confirming that the app is now available for download on Google’s Play Store in a tweet this morning, the corporation added that it would also be available on Amazon’s app store for its Kindle Fire tablets “very soon”.

The BBC launched its original iPlayer Radio apps last year, in October, releasing a native iOS app plus mobile web and desktop apps. The move extended the touch points for its digital on-demand iPlayer service by breaking out the radio content into a standalone app — with the  ultimate aim of shifting all radio listening off the BBC’s main on-demand iPlayer service so that can focus on TV.

At the time of the original iPlayer Radio app launch, the BBC said an Android version would be coming soon but said it needed to iron out Adobe Flash issues for the app to work across the various flavours of Android device. In the event, the BBC notes on its blog that it used the HLS (Http Live Streaming) protocol, rather than Flash — since the latter is no longer available for Android.

Using HLS has a number of benefits including the ability to efficiently access high quality live and on-demand audio whilst allowing you to continue to use other apps on your device at the same time, and allows us to develop exciting new features in the future.

The BBC also writes that is has “followed a slightly different design pattern for the Android version of the app” than iOS, noting that on the earlier app some content is revealed by swiping upwards “to show a ‘carousel’” — but on Android swiping horizontally takes the user through all the content from the currently selected station. This means there is more space to play with in the app — “when considering additional functionality and extra content in the future” — and the BBC said it will “look at how we can reflect this model in our iOS app in the near future as well”.

The current Android app listening on Google Play warns that Samsung Galaxy S3 owners may encounter an audio playback bug — if they bought their device via a carrier. 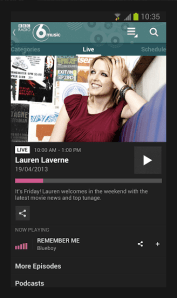 The listing notes that the issue is  “due to a problem with a specific recent firmware version” that has been fixed by Samsung but may not have yet been rolled out across all networks.

At the iOS app launch, the BBC said the vast majority (90%) of radio listening was live, rather than on demand. iPlayer Radio  caters to that listening preference by putting live listening front and centre, via a tap-to-listen stations dial, with catch up features tucked away in the background. In its most recent iPlayer usage stats

Two months after the iOS iPlayer Radio app launched, the BBC said it had passed one million downloads.