Eighty-seven percent of the nation’s top economists think that the digital currency, Bitcoin, has “limited usefulness.” Given the growing popularity of the enigmatic currency, the University of Chicago conducted its famous Initiative on Global Markets (IGM) poll of 38 of the world’s top economists, to see how experts felt about its longterm future. By far the best response came from the former Chairman of the President’s Council of Economic Advisers, Austan Goolsbee, who simply wrote, “Hahahaha. ROTFL.” 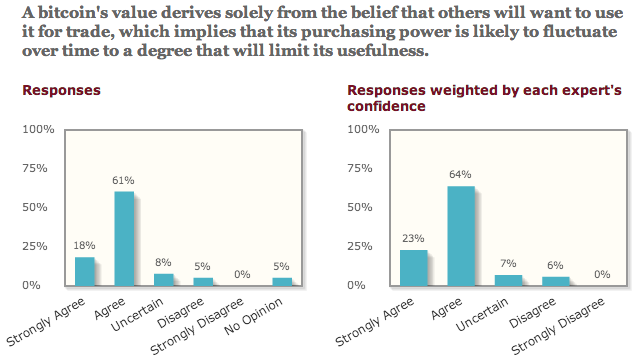 Bitcoin is a digital currency designed by an anonymous programmer that is produced by “miners” who contribute expensive computing power to solving the mathematical puzzles necessary to bring more of the scarce currency into existence. Early speculators and anarchy-friendly buyers gave the crypto-currency an early boost, eventually earning it mainstream acceptance at popular websites, including the home of lonely netizens, OkCupid. Even after months of wild swings in value (from $205 to $105 during one day), more and more shops are starting to accept bitcoins alongside dollars. (for an awesome explanation, see the Colbert Report video below):

It appears that the nation’s top economists don’t have the same faith in Bitcoin as the proprietors of the online dating service. The overwhelming majority surveyed felt that Bitcoin’s crazy fluctuations will inherently “limit its usefulness.” Former editor of the prestigious American Economic Review, Judith Chevalier, wrote: “Unlike government issued fiat money, there is no guarantee it can be used to pay taxes or settle other obligations.”

Of course, the expert crowd wasn’t unanimous. Stanford’s Caroline Hoxby wrote: “First part is right: value derives from belief others want to use it for trade. Second part is not obvious: beliefs could stabilize or not.”

While this isn’t a glowing endorsement of the nascent currency, it’s worth noting that economists occasionally have difficulty predicting events, such as the massive recession that almost tanked the global economy. Still, people are investing their own money in Bitcoin. Question is, do you want to bet against 87 percent of top economists?