GroupTalent launched in December of 2011 to offer solace to the many startups struggling to find top technical talent. Some might stand opposed to this ongoing “talent drain,” while others will call it a full-blown war. Whatever you call it, startups today are hard-pressed to lure top developers and engineers away from the mighty perks and siren calls of companies like Google, Facebook and Twitter.

So, GroupTalent set out to simplify the job search both for engineers and developers themselves, as well as the startups hoping to attract them — whether for contracted work or full-time. To do this, the startup culled together a bullpen of (vetted) talent and designed a matching engine to automatically pair these developers with relevant projects and companies, and vice versa. Having built its recruitment network to 4,000 developers, the TechStars grad took on $1 million in seed capital in February from investors like Version One Ventures and Menlo Ventures.

With its new capital in toe, GroupTalent is now looking to focus on its key markets in order to prevent itself from biting off more than it can chew. Beginning today, rather than attempting to cater to those looking for jobs in a diversity of markets, GroupTalent is narrowing its focus to the cities where it can be more effective, and where most tech startups are already: San Francisco and New York.

While the startup will continue to accept projects from anywhere in the world, it is now resolved to only place talent in San Francisco and NYC. The reason being, CEO Manuel Medina tells us, is that the company has concluded that, at the end of the day, startups are best served by local talent. By focusing on cities with greatest tensity of talent, it can build a community of contract-for-hire developers that actually live in the same city and are ready to go.

While GroupTalent’s talent-matching platform has a lot of appeal in concept, there have still been some gaps in the user experience, some of which stem from the broken hiring process itself. Today, the startup is doubling down on its efforts to fix the process with the release of a series of features, like a recruiter spam filter, which aims to help reduce the noise for those on the job search.

In addition, the startup is also focusing more intently on contract-to-hire opportunities by encouraging developers to engage in part-time, contract work before looking for a long-term position. While this may not seem ideal, as many would prefer the stability of a full-time position at a startup of choice, GroupTalent believes that promoting contracted positions will help spread the love among startups that have immediate needs that need addressing. With developers being encouraged to take a greater number of short-term roles, in turn, more startups are able to benefit from that increased access to top talent. 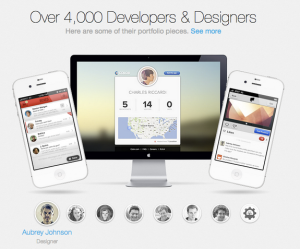 In turn, Medina believes that, with developers and designers engaging in multiple contract-to-hire opportunities, both talent and the startups they work for will be able to find better matches. Rather than forcing the issue, talent can test the waters and get to know the company, its product team and engineering teams. Then, if it proves to be the right fit, then they can commit to a full-time position.

GroupTalent relies on its proprietary “eHarmony-like” algorithms to identify the best matches between talent and employers, which, again, sounds great in theory, but is only truly effective with the right user experience and controls. With its new spam filter, the startup now allows developers to claim a “job inquiry inbox” and an “@grouptalent” email address in an effort to help filter out unsolicited or untargeted emails from recruiters.

While Gmail and other popular email clients offer filters to help users tame the email fire hose, GroupTalent wants to apply those “commercial” spam filters to hiring; in other words, to weed out “job spam.” This enables developers to filter out emails that don’t have any details, are for a different tech stack or skillset, or are below their ideal pay scale.

Essentially, this means that the platform now reviews every solicitation sent to a developers’ GroupTalent email address, comparing the opportunity to their pre-defined preferences for criteria like timing, compensation and subject matter. Those that fit the criteria are then pushed to the top, while the rest goes into the spam folder.

Starting today, GroupTalent is making its email concierge service free to developers. To further incentivize would-be customers, developers and designers receive a $500 referral bonus if someone they recommend takes a job. On the flip side, Medina hopes that the email concierge won’t just benefit talent, but will provide a leg-up for startups and recruiters by ensuring that their communications reach the right people — and are actually targeted the first time. In turn, GroupTalent provides feedback for employers on why developers turn down their opportunities — the idea being to increase the value proposition on both sides.

GroupTalent is also offering the first 100 TechCrunch readers interested in testing out its new service an opportunity to waive the first hire fee of $5,000 for employers who use GroupTalent to make a hire. The code is “TALENTCRUNCH” and can be entered here. 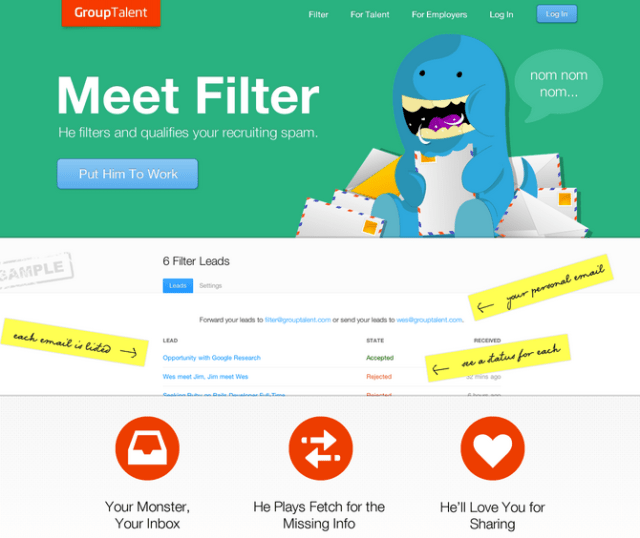