So, you’ve built yourself a nice little product. Maybe you’ve raised a small friends-and-family round; maybe you’re still bootstrappin’ on your own. Either way, now you’re looking to raise at least a million dollars to help with the next steps.

While there’s no perfect formula for stuff like this, these stats from AngelList’s Ash Fontana are a pretty good indication of the metrics you should be aiming for.

As part of the FirstTuesday startup gathering in Santiago, Chile, this evening, Ash presented a slide outlining some ballpark metrics that startups should aim for before swoopin’ in for a big first round: 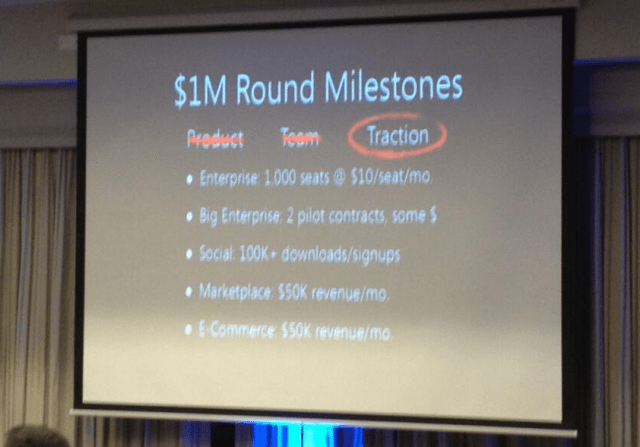 As a Venture Hacker at AngelList, Ash’s job involves poring over tons of deals to try and work out exactly what makes a good deal go down. In a conversation I had with Ash earlier, he asked me to note that these numbers are just his rough estimates based on this insight; they’re not crunched directly from AngelList’s database.

The bulk of the slide is pretty self-explanatory — just consider each bullet point a sort of theoretical entry bar for companies looking to raise a $1M+ round in a given category.

If you’re a social company, you’d do well to have at least 100,000 downloads and/or signups before going after your million-dollar round. If you’re running a marketplace or e-commerce company, you should be aiming for around $50K in revenue each month. If you’re going after the enterprise, you’ll want at least 1,000 paid seats at $10 per seat per month (or the equivalent for your pricing model); if you’re focused on big enterprise, you should lock down at least two huge (pilot) contracts.

You may note that “Product” and “Team” are crossed off at the top of the slide. This is from earlier in the presentation, when Ash reaffirmed just how important traction seems to be. Assuming that we’re talking about an average team with an average product (that is, unless your team has a very well-proven entrepreneur or two on its roster, or you’ve built some truly hardcore, one-of-a-kind tech), traction is everything.

These numbers, of course, aren’t concrete. In fact, they’re very much ballpark figures. You shouldn’t expect to hit your 100,000th download and suddenly have every VC in the valley bangin’ on your door. If you’re able to get your stats up in these ranges and can score yourself some meetings, however, you probably won’t have too much trouble sealin’ the deal.