With “Don’t Get Scroogled,” Microsoft went for shock and awe in its fight against Google by arguing that the search giant can’t be trusted with your personal information. Today, Microsoft is launching a far more restrained campaign: an online safety and security resource center, a privacy quiz and a new TV ad that proclaims that “your privacy is [Microsoft’s] priority.”

Unlike “Scroogled,” which takes some cheap shots against Microsoft’s competition, this new campaign takes a more general and positive approach. The campaign, Microsoft’s general manager for Internet Explorer Ryan Gavin says in today’s post, is meant “to help people learn more about the tools and technologies Microsoft provides that give them have greater control over personal information as they browse the web and use their favorite Microsoft devices.”

For Microsoft, of course, this is also an opportunity to highlight features like the default “Do Not Track” settings in Internet Explorer 10, it’s Personal Data Dashboard and Bing’s privacy settings. 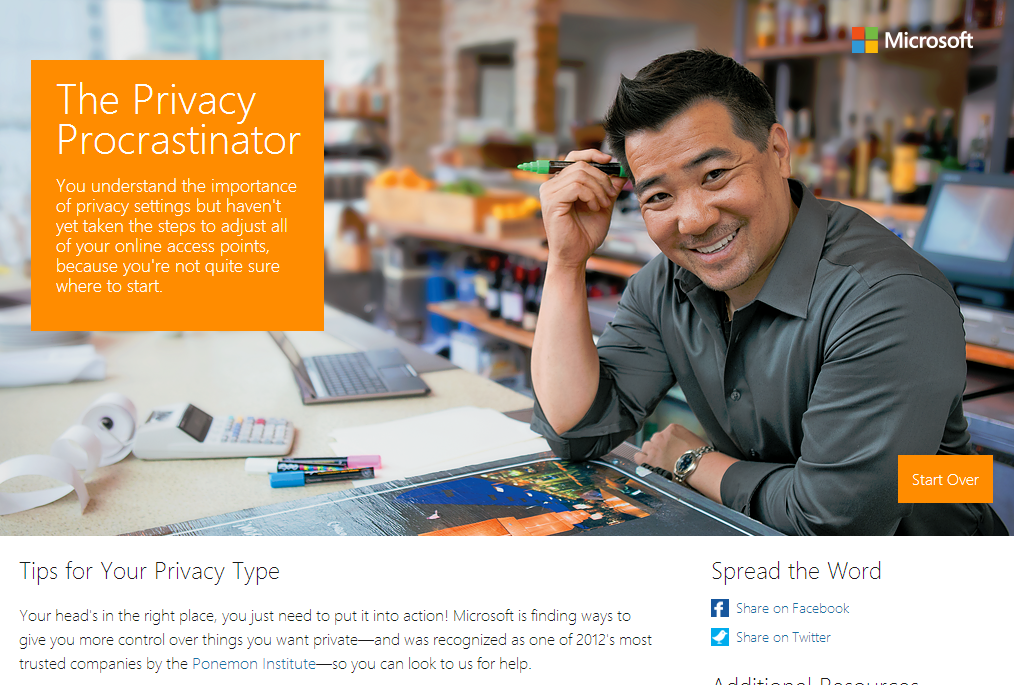 Not everything Microsoft does in this space is new, of course. Every other browser also features an “incognito mode” in some form or another and Microsoft, of course, isn’t the only company to enable “Do Not Track” in its browser (Google and Mozilla also do so). It’s still unclear whether advertisers will ever fully support this feature anyway.

Microsoft clearly believes that it has an advantage against Google when it comes to people’s perception of how trustworthy the company is. A recent Ponemon survey that looked at how consumers’ perception of how trustworthy companies are, Microsoft outranked Google. As #17 on this list, however, Microsoft was still ranked well behind American Express, HP, Amazon, IBM, Verizon, Disney and other major companies, with Mozilla – which is relatively unknown as a mainstream brand – coming in as #20.