Another sign of the swift rise of tablets today: last month tablet usage of the BBC’s on-demand online TV service iPlayer edged past mobile for the first time, with 41 million programme requests by tablet vs. 40 million on mobile, according to BBC stats for the month. There were 200,000 more requests on tablets than mobiles. Overall, across all device types, the service saw 272 million full length programme requests in March in the U.K.

As a percentage of the overall requests by device type, tablets and mobiles took a 15% of the March pie. Judging by the below graph, the two devices have clearly been eating into the share of the main iPlayer access device: the traditional computer. The stats show mobiles and tablets have driven down the usage on computers from 59% in March 2012 to 47% in March 2013. Over the same period, tablets have grown their share from 6% to 15%, and mobiles from 9% to 15%. 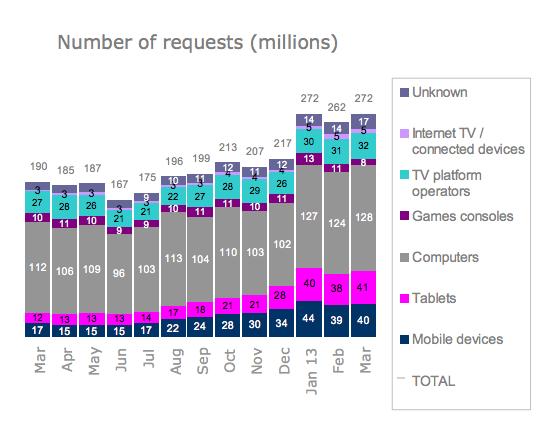 This finding aligns with wider industry analysis that PC shipments are declining as people buy and use alternative smart connected devices, such as tablets and smartphones. Gartner predicts almost 200 million tablets will ship globally this year, powered by YoY growth of nearly 70% (IDC pegs the rate at 78.4%). While PC shipments are predicted to decline 7.3% this year. In another related data point to the BBC’s figures, last month, Adobe’s latest Digital Index recorded the proportion of web traffic coming from tablets also pushed past smartphones for the first time.

The BBC’s on-demand TV service, which lets viewers catch up on scheduled programmes after they have been broadcast, is exactly the sort of app you’d expect to thrive on the tablet form factor — which is both portable and has a screen that is large enough to view high production value video content without compromising the overall viewing experience. And the BBC’s iPlayer data bears this out: with considerably higher tablet usage for TV programmes vs radio content.

Looking specifically at TV content, the BBC said tablets took a 19% share of iPlayer programme requests in March compared to 17% for mobile. But its radio only data shows tablets dropping right down to 4% while mobile took 10%. Computers swelled their share to 68% of the radio data — suggesting people who are using their computer to multitask use iPlayer to stream radio in the background while they browse the web or work.

The BBC’s iPlayer data also flags up another interesting difference between how people consumer TV and radio content online — with the majority (88% in March) of TV requests being on-demand (i.e. catch up) requests, rather than live TV viewing. But for radio the proportion is almost reversed, with 83% of the radio requests being for live listening.

The BBC licence fee may explain a portion of this behaviour, since iPlayer users are required to be licence-fee paying to view live TV (but do not need to for radio). But it also suggests continued decline in live TV viewing among the iPlayer demographic (which skews younger than traditional TV viewers, with 76% of iPlayer users aged under 55 as of Q4 2012). The proportion of live TV viewing on iPlayer did increase in August (to 32%), possibly owing to the Olympics.