Indie and vintage clothing site ModCloth has arrived on the iPhone, following the launch of the iPad native application earlier this year. The move comes at a time when the e-commerce company reports seeing tremendous growth on mobile, with mobile devices serving a quarter of its traffic today. To its credit, ModCloth has moved quickly to meet that demand – CEO Eric Koger even now says that the company is pushing to become “mobile-first,” in terms of development. 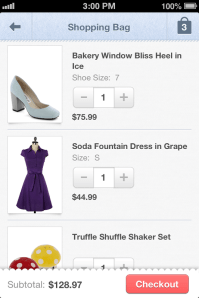 “All of our development is mobile first now,” he explains. “Early on, we realized there was this huge opportunity to innovate the experience of shopping for fashion and building it with a community-first mentality,” says Koger. “In 2008, we started development of our own platform and made technology development a core competency for ModCloth. And with the incredible rise of the iPhone and mobile platforms, we’re now doing all of our development mobile-first.”

While an iPad version of the online shop makes sense in terms of browsing, and flipping through big images of ModCloth’s indie products which now range from fashion to home decor and more, the iPhone version was a necessary next step for the company, not only because of its increasingly mobile traffic patterns, but also because of its business model.

ModCloth is an online-only retailer of vintage-inspired fashion and decor, which now works with thousands of indie designers to stock its virtual shelves. At any given time, there are 700 indie designers’ items featured on the site, and throughout the day, new products are made available as others sell out – roughly 50 new styles appear on the day each day, many of which sell out quickly.

“We tend to buy in relatively small lots, testing out which designers have good products which work well for our customers,” says Koger. “We’re very experimental.”

Koger says that Susan, ModCloth’s co-founder (who’s also married to Eric), and her team of buyers often fall in love with items that don’t really have a mass market appeal. So the company developed a business model that allows them to test out the new products to see which ones really resonate with ModCloth’s user base. This is not only reflected in the size of its buys, but also in various site features like the crowdsourced “Be the Buyer” section which lets users vote on samples they would like to see placed into production. 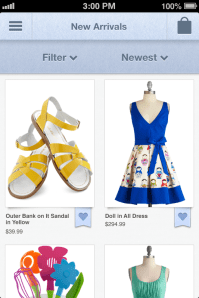 Other e-commerce companies like the kids clothing shop One Jackson (later acqui-hired by TaskRabbit) mimicked that model to some degree, though arguably with less success than ModCloth.

But because of the site’s quickly-changing inventory, as well as the way it allows users to track out-of-stock styles for reemergence, going the mobile app route makes a ton of sense. Both the iPad and iPhone app can tap into the device’s push notifications feature to immediately alert shoppers wherever they are when the items they want to have returned to the site for sale.

The iPhone app also introduces a more streamlined checkout process, making the sometimes painful m-commerce experience easier on ModCloth customers. It also keeps users’ payment info on file so they don’t have to re-enter it each time they shop.

Outside of its mobile plans, ModCloth will be focused on better serving its large Pinterest user base (over 2.5 million followers) in the near-term, and over the next few years expanding its reach by offering plus sizes (sizes 16-22), as a longer term strategy.