Today, Google quietly ushered in a new application built on top of its nonprofit arm, Google.org. The app is called One Today, and it’s currently invite only for Android users at this time. The aim is to get people to donate $1 to different organizations, while getting the complete information about how your donation will be used up front. This is a huge stumbling block for nonprofits usually, as people are afraid that their money won’t actually get spent on making a real difference. One Today aims to change that.

Additionally, One Today has a social component to it, letting you set a cap to how much money you’ll match if your friends donate to a cause. By using Google Wallet, you can simply pay off your “donation balance” once all of your friends have used up your cap. It’s a pretty interesting way of crowdsourcing donations. When I talk to people about giving money to causes, the first problem they have is that they can’t find one that they’re passionate about. By allowing you to put the choice of who to donate in your friends’ hands, this problem simply goes away and there’s no excuse not to give. You don’t have to involve others though, as you can participate by yourself or interact with the app’s community. 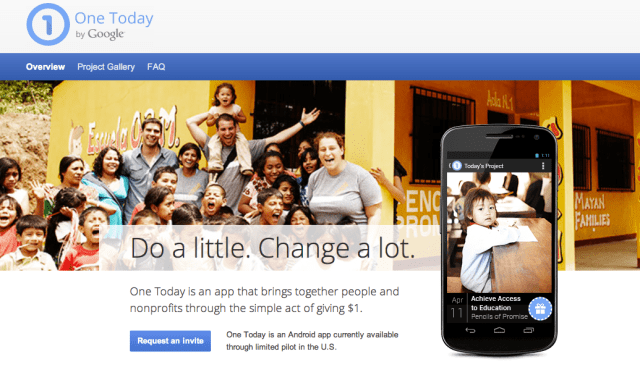 Currently, the landing page allows you to request an invite, even though the app itself is available for download on Google Play. If you open the app, you’re shown the invite screen yet again and there’s no word on when One Today will start opening itself up to users and donations.

Some other interesting aspects of the app are that it’s populated only with nonprofits that Google for Nonprofits is currently working with, so you know that they’re pre-screened. Other sites, such as Causes, are filled up with organizations that have little or no information about itself or what is done with the money that they’re raising. That’s clearly not the case with this app, according to the programs that will be pre-populated: 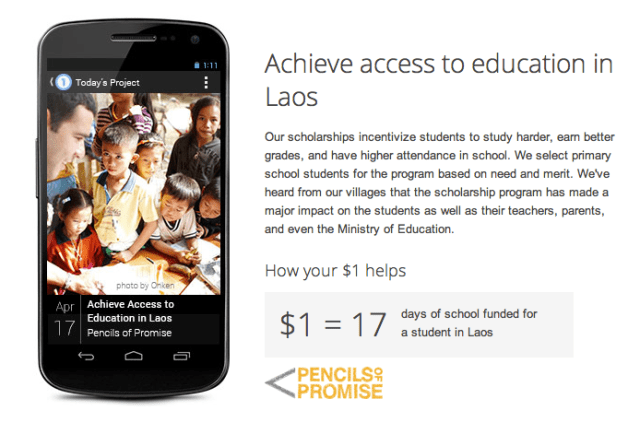 Organizations can also register to be included.

From the looks of the app screenshots, One Today seems extremely polished and well thought out. This is an app that Google hopes you use daily: 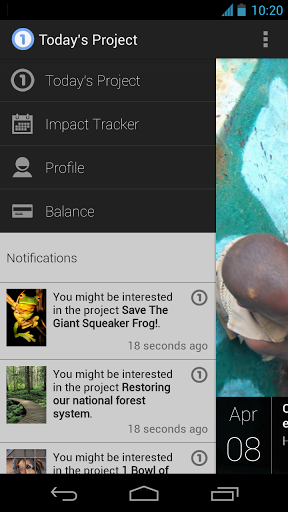 The reason for putting this together is addressed in the app’s FAQ:

Google has a long-standing commitment to supporting nonprofits and to do doing good. One Today makes fundraising easy for nonprofits, it also makes giving simple and fun for users.

But yes, Google does collect a 1.9 percent credit card fee, but that’s not much considering that it takes care of the processing and donation routing for you. These donations are also tax deductible, of course.

The idea of accepting one dollar at a time is easy enough for anyone to chew on, and get into the rhythm of daily giving, which could be a more rewarding experience than giving a lump sum to just one charity every year, for example. As you donate more, the app will start recommending other organizations that might interest you, which is a Google Play app-like purchasing experience. When you tap “give,” it’s actually a pledge, and you’ll be notified to settle your balance once you’ve pledged to a few organizations.

With this approach, micro-donations could actually catch on and raise more money for these nonprofits than ever. In many situations, it’s not the actual amount that you donate, it’s the awareness that your social actions bring. One Today is an amplification tool, and it will be interesting to see how the project evolves once it opens to the masses.