Twitter today took the latest step in its bid to build up its advertising business, which some estimate could reach $1 billion in revenues this year: it has introduced keyword targeting to the platform. This means that brands and others can now plan and serve ads to users based on specific words in users’ tweets. Twitter says the service is rolling out across all of its ad network, mobile and desktop, covering 15 languages and all markets where it currently serves Twitter Ads. However, it is careful to point out that this will not mean more ads, but simply ads that are more specific to what you happen to be mentioning on the site.

As Twitter notes in a blog post today, perhaps one of the most important aspects of this new feature is that it will be useful for brands and advertisers to use it to target intent.

“It lets marketers reach users at the right moment, in the right context,” the company notes. In Twitter’s description:

Let’s say a user tweets about enjoying the latest album from their favorite band, and it so happens that band is due to play a concert at a local venue. That venue could now run a geotargeted campaign using keywords for that band with a Tweet containing a link to buy the tickets. That way, the user who tweeted about the new album may soon see that Promoted Tweet in their timeline letting them know tickets are for sale in their area. 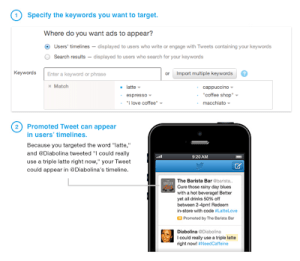 Twitter says that early trialists, Everything Everywhere, Microsoft Japan, and Walgreens saw that “users were significantly more likely to engage with Promoted Tweets using keyword targeting in timeline than other forms of targeting in the timeline.”

eMarketer is more modest about what Twitter might achieve in ad revenue this year. It believes that it will globally make $582.8 million in 2013 and approach $1 billion in 2014. Twitter made $288.3 million in global ad revenue in 2012, it estimates. Some 83 percent of that will come from the U.S. this year — perhaps a proportion that will drop with universal launches of new features like this one. It believes that by 2015, non-U.S. ad revenues will be $319 million.

What the new keyword targeting feature does not address, however, are the many people who use Twitter but do not themselves tweet. Nor is it clear how instantaneous “the right moment” will be, and for how long those targeting moves will remain after you post a tweet. Given the fleeting nature of Twitter in general, how will we know if what you think about in one burst of 140 characters will stay on your mind long enough for a follow-up, targeted keyword tweet to stick, rather than feel stale or creepy?

The new keyword targeting tool will be available both through the Twitter Ads dashboard and through Twitter’s ads API.