The Hunt, a site that helps you find items to buy from photos posted on Pinterest, Instagram, Tumblr, and elsewhere, is today announcing $700,000 in additional funding, on top of the $2 million it had previously raised from Javelin Venture Partners and others. The new round involves several high-profile investors, including Ashton Kutcher, Guy Oseary’s (Madonna’s manager) A-Grade Investments, marketing and branding expert Rohan Oza, Desi Hits CEO Anjula Acharia Bath, and media investor Michael Banks.

Reportedly, the site has already attracted a handful of half a dozen “celeb” users, including a few TV actresses, as well as Christina Milian, and others which the company is not yet disclosing. The interest from this group, to some extent, prompted the follow-on investment.

“When we started talking to them, they immediately – in particular, Ashton – got how we were very different from all other curation sites and all other fashion tech startups,” explains Tim Weingarten, co-founder and CEO of The Hunt. “And once you get one or two of these [celebs] in, the word spreads,” he adds.

The draw for the service, for those unfamiliar, is that it helps connect the images being shared across the web and social media, to products people can actually buy. For celebrities and other well-known fashionistas, The Hunt offers them a new way to engage with their fans or audience. 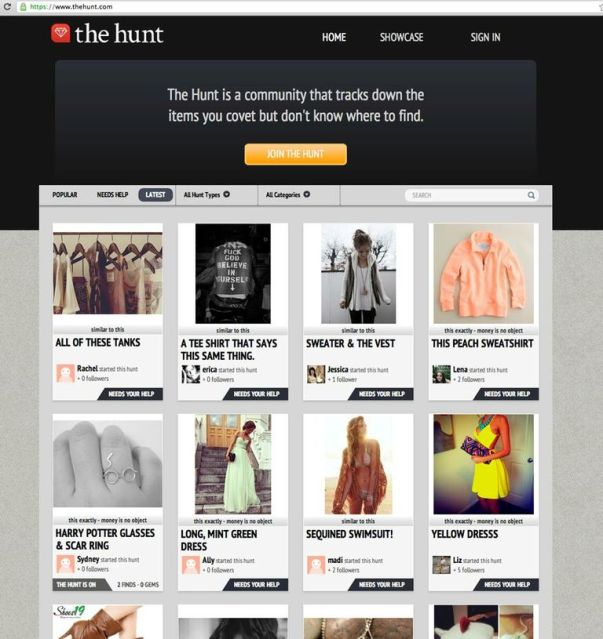 The bigger picture, however, is that The Hunt makes online shopping a more directed, active experience. While today’s retailers are only now slowly experimenting with solutions to track and convert their younger, social, photo-sharing user base to paying customers, The Hunt allows these individuals to take matters into their own hands. After joining the site, you can post a photo of an item you like, including those from websites you’ve visited, plus you can connect to Tumblr, Instagram and Pinterest to import your likes and posts.

Then, to start a “Hunt,” you simply click on the image of the item you liked, and fill out some additional information. 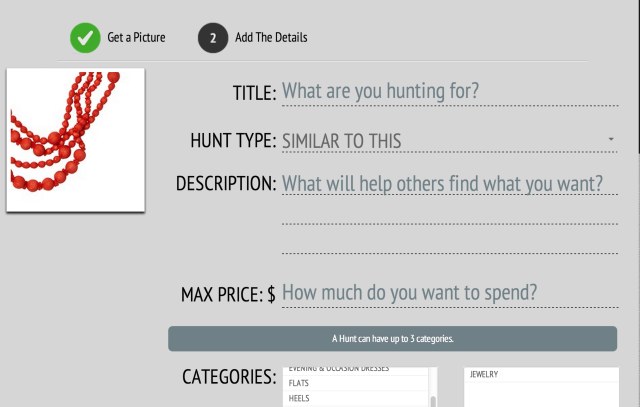 What’s interesting here is that The Hunt isn’t simply an image-matching algorithm at play. Instead, users can specify that they want a look that’s “similar to this,” “this look for less,” “what goes with this,” or even “this exactly.” They can also specify the max they want to spend, and which categories should be “hunted” in to find other options.

The Hunt relies on an active community of fashionistas who solve the quests others post. In January, the company said that around 20 percent of its user base solved hunts, and that ratio has remained the same as the startup has grown over these first few months. Weingarten says the draw for this crowd of problem solvers is that this is something they do as a hobby anyway, and now through the service they’re surrounded by others like them, while also being able to track how well they’re doing with their styling suggestions through built-in feedback mechanisms like the “gem” button (a favoriting function), or the ability to track when a hunter marks their hunt as solved by clicking “Perfect.”

Weingarten also notes that, at present, clicks from The Hunt are converting to purchases on e-commerce destinations at around 1.5 to 2 percent – an increase from the typical conversion rates of somewhere in the range of 0.1 to 0.4 percent that social media, in general, drives. 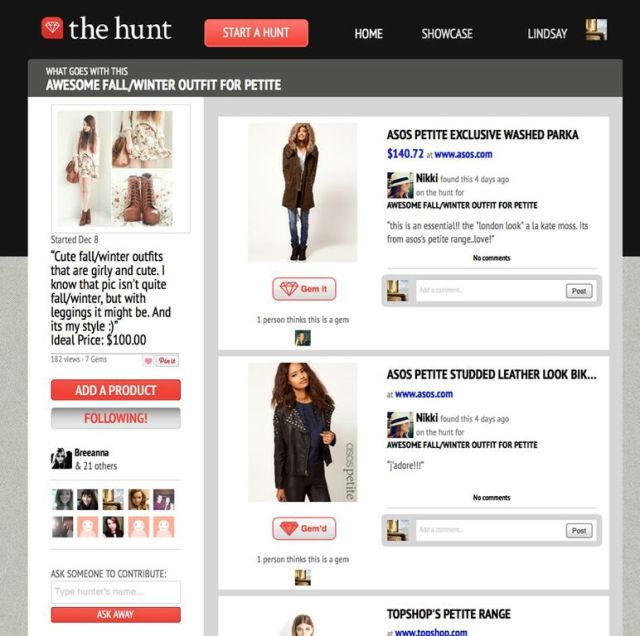 The majority of the sites’ users are simply in search of a favorite look for less. This intent to purchase is an area The Hunt could later capitalize on by working with merchants and e-tailers more directly to address.

Prior to its official launch, the startup had generated over 65,000 active members who spent an average of 24 minutes on the site per day. Today, the company says that number has grown to over 200,000, and it is now steadily adding 50,000 new members each week. Users are still spending roughly the same amount of time on site as before, at 25 minutes per session. The Hunt is also now seeing 1 million monthly uniques.

In January, members had found 115,000 products from over 10,000 unique stores, leading to 250,000 e-commerce referrals. Now, The Hunt says its members have found over 200,000 products. These tend to be items in the women’s fashion space for now, but the company wants to expand further into decor, beauty, and men’s fashion going forward.

The immediate plan for the funding is to grow the team of nine by adding a handful more engineers (iOS and web), and to continue product develop. This quarter, The Hunt will ship an iPhone application, which will allow users to snap photos on the go of either street style or in-store inspiration. In the meantime, interested shoppers can sign up to start hunting here.