A new report from online advertising company Turn suggests that costs for display advertising, video ads, and other rich media are rising, while those for mobile and social ads have fallen. The report also looks at a category of consumer that advertisers are spending heavily to reach — a group that Turn calls the “digital elite.”

The report is based on activity on Turn’s ad-buying and data-management platform between January and March. The company says its technology makes more than 50 billion advertising decisions every day.

Between January and March, the average eCPM (the cost per thousand impressions) for video ads grew 6.16 percent, from $9.41 to $9.99, Turn says. Display eCPMs grew from $0.92 to $1.06, up 15.2 percent. The company says this reflects advertisers’ desire “to reliably reach consumers through familiar, big-canvas formats.”

Mobile, meanwhile, dropped 45 percent from $1.31 to $0.72 — something that Turn attributes to concerns over the lack of standards for anonymous tracking. The company says that social eCPMs fell from $.30 to $.24, down 20 percent. At the same time, Turn says social ads (basically Facebook ads and Facebook retargeting) have become “immensely popular” and now account for billions of impressions per month on the Turn platform alone. 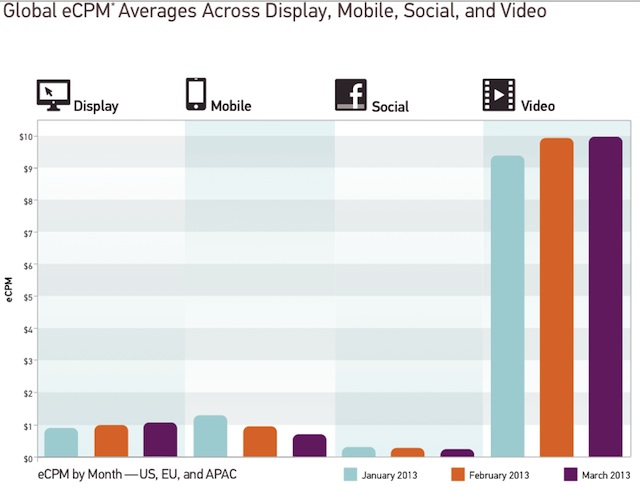 As for the “digital elite,” Turn says it’s the report’s “biggest discovery” — a particularly desirable audience that includes 2 percent of consumers. They see 24 times more ads than the average consumer, and advertisers pay eCPMs that are 85 percent higher than average to reach this audience. Here’s how Turn describes this elite:

The Digital Elite are typically aged 21–34, live in cities, and love foreign travel. Earning more than $76,000 a year, they’re fond of gadgets and upscale brands such as Banana Republic and Sephora. They have diverse media tastes, enjoying public radio, Family Guy, Elle, and GQ. You’ll find them at concerts and bars.