Mobile service provider NQ Mobile today released a study of malware covering 2012, using data gathered from the company’s Security Labs. It found that malware threats in general on mobile platforms grew 163 percent in 2012, totally more than 65,000 identified distinct forms of app repackaging, malicious URLs and SMS phishing (also known as smishing). The attacks were mostly geared towards Android devices, which was the platform of choice for almost 95 percent of threats identified by NQ.

Trends indicate we’ll only see more attacks, and more creative ones, according to NQ. In February, security researchers identified a new type of malware that uses an Android device as a launch platform for infecting a target computer via USB connection, the company said. That remains limited to only a few identified infected handsets, but it’s a troubling attack vector that could pose plenty of problems down the road if it becomes more sophisticated. In a release, NQ Mobile co-CEO Omar Khans said that what’s needed is a system that can detect threats in advance of infection and prevent them, something which so far hasn’t really been widely available. 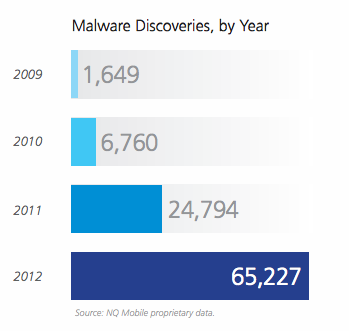 NQ Mobile’s report found that more than 32.8 million Android devices were infected over the course of 2012, up more than 200 percent from 2011. Of course, the general Android device population grew massively over the course of the year – a recent ABI Research study indicates that there will be over 798 million active Android devices by the end of the year, compared to around 300 million as of early in 2012. And the U.S., despite having a large chunk of the overall user population, is actually further down the list in terms of target countries, with just 9.8 percent of infected devices, compared to 25.5 percent in China, 19.4 percent in India and 17.9 percent in Russia.

Mobile malware infections are likely to continue to rise as it takes over popularity from PCs as a way for users to connect, and there’s little that can be done about that save ensuring that users take the same precautions on mobile that they would on those platforms. The problem may be more complicated on mobile operating systems, however, due to fragmentation, which NQ says contributes to weaker security for users running older versions of Android like Gingerbread. App sideloading and a user population that’s skewing younger every year is also contributing to a rise in potential security risks, the company says. 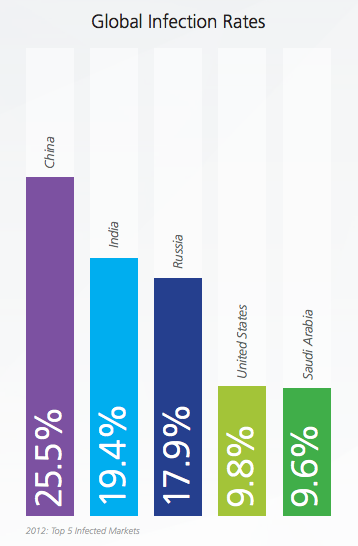 NQ’s data indicates that Android is a big risk for malware, but iOS has also recently come under fire for free apps that leak more personal data than on other platforms. Overall, mobile security is likely to be a growing concern, and one that could potentially become more complicated as the pace of improvements to mobile tech increases and our usage of those devices grows higher still. For now, common sense is probably the best defense against security threats, but a more unified Android platform would help to limit malware problems as well as significantly improve developers’ lives.