Bernstein Research has issued a research report saying it expects AWS will have an estimated $20 billion in revenues by the end of the decade. In a separate report, RW Baird & Co. projects $10 billion in revenue for AWS by 2016 and up to $40 billion in losses from the traditional IT market. The estimates reflect Wall Street’s growing confidence in cloud services and the need that analysts see in letting their customers know that a shift is underway that will lead to continued flat revenues or even losses for enterprise companies and systems integrators. 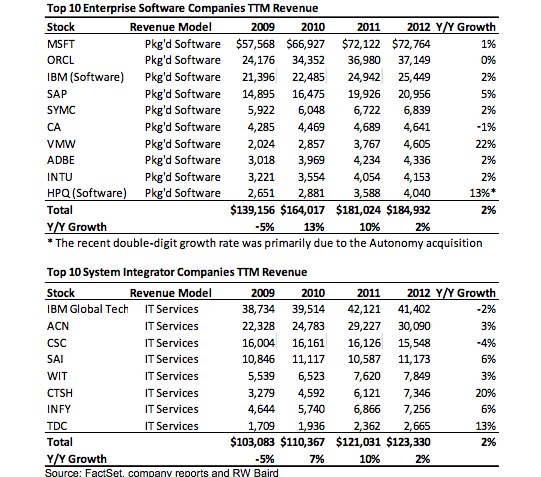 In times of disruption, something like AWS may actually exceed investment analyst projections. Conversely, AWS success is not a certainty. Technologies may advance that will flatten AWS advantages or Amazon can’t scale the group’s services fast enough to keep its edge. These are the factors that investment research houses consider when making corporate financial projections. Overall, Baird and Bernstein cite a number of reasons that account for why AWS will do so well. The reasoning is sound but not without weaknesses, such as why AWS success will be harder to come by with large enterprises.

The public cloud reached a turning point last year. As Baird states in its report, the top 10 cloud providers grew 37 percent while more traditional technology companies grew by 2 percent. AWS does not break out its revenues. Bernstein, based on its own research, estimates that AWS grew 100 percent year-over-year. Bernstein estimates AWS is worth $24 billion, 13 times its approximate $1.8 billion in revenue (Amazon does not break out revenues for AWS).  In contrast, Bernstein reports that Rackspace, as of April 1, trades at about 5.3 times 2012 revenue. Its revenue grew 28 percent compared year-over-year. Its public cloud service revenues of $309 million account for 23 percent of total revenues. Rackspace, it should be noted, has aggressive expansion plans of its own and has been one of the founders of OpenStack, the open cloud effort. Developer interest has grown consistently in OpenStack since its unveiling. Google is a more concerning foe with Google Compute Engine and Google Apps. And Microsoft’s Windows Azure puts the company in position to compete in the cloud space.

How The Market Breaks Down

Enterprise Software: Baird Analyst Steve Ashley, quoted in the AWS report, “views client/server vendors like… SAP and BMC as most likely disintermediated, and SaaS companies like Salesforce, Concur, and cloud infrastructure vendors like Citrix and Red Hat as beneficiaries of the shift towards cloud computing.”  The former are large, powerful companies that have built core businesses critical to IT. How these companies adapt is still a big question.

Customers will continue to invest in these providers  to keep their businesses running. The time is now to ramp up and offer SaaS options, embrace mobile  and offer friendly developer environments.  “Over time traditional IT will be forced to go to SaaS. The first choice will be mobile,” said Forrester Research Analyst Lauren E. Nelson to me in a recent interview.

IT Systems and Networking: According to Baird, HP and Dell have the potential to be most disrupted. EMC, VMware and NetApp also face exposure. When customers start using AWS, they stop buying storage and networking equipment. That certainly is a factor but data is so deeply embedded into these systems that analytics will give these players value over time. They also have deep histories with enterprise shops, and that dominance is not going to pass anytime soon. Realistically, AWS does have its own weaknesses in both storage and networking. ProfitBricks, for example, is leveraging its InfiniBand network and instance sizes that can scale to 62 cores and 240GB of RAM. HP is making its own play with OpenStack, as is Dell, which is also putting a deeper focus on next-generation storage and networking technology. Here’s Baird’s “competitive heat map” that shows how AWS stacks up compared to the rest of the market.

The greater danger stems from the AWS infrastructure and the breadth of what the cloud service offers. Developers get choice when they use AWS. It’s useful for test and development, as an extended network for media companies to offload peak demand. Pharmaceutical companies use AWS for its computational power and storage. According to the Bernstein report, customers that use AWS face high switching costs, because they use more services and customize their applications. And so even if there is more competition, AWS will most likely be able to protect its high margins, which Bernstein estimate at 25 percent. Amazon weathers pricing wars with the rapid addition of new features.

Importantly, the vast majority of the customers we interviewed stated that they would not change IaaS providers even for a 20% or so price discount, as switching would bring risks and, importantly, require them to invest scarce development resources, for example, to redevelop monitoring and management tools on the new provider’s application programming interface (API). While customers running relatively simple applications (e.g., the front end of a website) did not see material switching barriers, most users we interviewed have more complex, and hence “stickier” use cases.

AWS benefits from the steep demand in the market for computational, storage and networking power. It is built on a distributed infrastructure. At its core, AWS is complex due to the additional technologies needed to make an app or service truly robust. But still, customers start with AWS and often remain loyal. In turn, AWS has become an ecosystem for developers. Ask about a startup’s infrastructure and the founder will often say they run it on AWS. But AWS is not the only game in town and it still has not proven that it can provide the deep infrastructure that the enterprise requires. It’s a 10-year cycle that is underway that will keep a lot of infrastructure intact, on-premise. That gives the enterprise giants some time, but to this date they have not shown a deep willingness to embrace the hyper-scale infrastructures that customers demand.