CodeNow, a nonprofit program that teaches coding basics to high schoolers, with an emphasis on reaching girls, ethnic minorities, and other underrepresented groups, is in the middle of a significant expansion.

After launching in Washington, D.C., in 2011, the program has now launched in New York City and is currently holding training sessions with its first NYC group. In a few months, it’s going to select participants in its first fellowship program, which will take place over the summer. And later this year it plans to launch in San Francisco.

CodeNow’s curriculum uses tools like Hackety Hack (for programming basics) and Lego MindStorms (for robotics). It involves a combination of weekend sessions and online coursework, as well as a boot camp (held over the longer school breaks or on consecutive weekends) with “intensive training” in Ruby.

One goal of the program is to turn students into programmers. Founder and executive director Ryan Seashore said that of the 10 alumni who have now graduated from high school, three have gone on to study computer science. At the same time, he said that the program has benefits “even if a kid never writes a line of code after our program.” That’s because they’ll have training in how to “think logically” and are “no longer fearful of technology.”

Even though the program started (and will continue) in D.C., Seashore has moved to New York, and it sounds like he can be more ambitious with the NYC program, admitting more students, holding more classes, and launching the fellowship program.

“There was a real need and desire for a program in D.C. — the financial support was just harder to come by,” Seashore said. 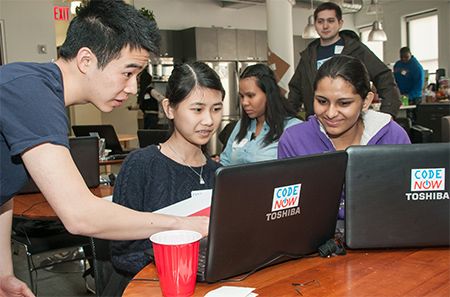 Speaking of CodeNow’s fellowships, they will be awarded to the best students in the first two NYC cohorts, and they’ll include a full-time stipend for six weeks of software development training and work. Between their initial CodeNow training and the fellowship, Seashore said participants will receive “300 hours of in-person training,” and CodeNow will also try to connect them with internships at “awesome tech companies.”

I haven’t attended any of the sessions, but Seashore sent me a few of testimonials, just to give me a taste of the students’ enthusiasm. An 11th grader named Tahara said her “favorite part of the weekend was waking up for CodeNow.” Mamadou, a ninth grader, said, “My favorite part was attempting and writing codes to get the lights to turn on and off for the arduinos.”

When launching in NYC, Seashore said CodeNow received more than 250 applications, from which the team selected 13 girls and 12 boys. Seashore said CodeNow accepts applicants from all five boroughs of New York, and it provides subway cards to help the kids get to the training sessions in downtown Manhattan.

Interested NYC students can apply here. The deadline is Wednesday, April 17. Adults, meanwhile, can sign up to volunteer.