Leaders from Facebook, Google, and other tech giants today announced they’re banding together to form a political advocacy group called FWD.us, designed to promote policies that will keep the American workforce competitive. The bipartisan group’s first priority is pushing for comprehensive immigration reform, but it will also support education reform and scientific research.

Zuckerberg published an op-ed in the Washington Post this morning describing the group’s mission “to build the knowledge economy the US needs to ensure more jobs, innovation and investment.”

The hope of FWD.us is that by easing immigration for foreign talent, enticing native entrepreneurs to stay in the country, and improving education, the American economy and people will prosper. By pooling their considerable wealth and influence, the group’s members can better support candidates and lobby for legislation that could fix the broken policies impeding the country’s success. Though the businesses of FWD.us members stand to benefit from improved domestic education and easier visas for foreign talent, the group insists the real beneficiaries are American workers and students.

Tech’s Most Influential Unite For Change

Former Causes and NationBuilder co-founder and current Andreessen Horowitz entrepreneur in residence Joe Green will serve as the president of FWD.us, which will operate as a 501(c)(4) non-profit social welfare organization that can receive unlimited donations. Green says “People in tech have often felt a cultural disconnect from the political process, which is a shame considering we are naturally idealistic; you often hear tech founders talk about how their motivation to create companies and products is to change the world. Our goal with FWD.us is to organize and engage the tech community in the issues where we can contribute to the national debate.”

Some of the founders and contributors have participated or fundraised for political causes or candidates before, and a few of their companies including Facebook have their own political action committees and spend millions on lobbying efforts. What’s unique about FWD.us is the shear magnitude of their combined power, and the idea that its being harnessed for a bipartisan agenda. 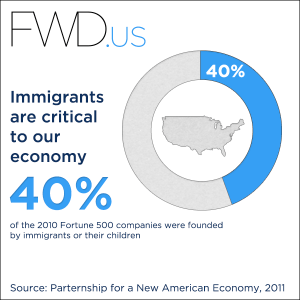 Jesmer tells TechCrunch that FWD.us plans to spring into action immediately, as the Senate Judiciary Committee will hold a hearing on immigration reform on April 17. FWD.us is expected to support the Gang Of Eight legislation, which includes a pathway to citizenship, much tougher border security, and guest worker programs for low- and high-skilled talent. Immigration reform, including easier access to H-1B temporary visas could help solve the talent crisis facing Silicon Valley. Right now it’s difficult for tech companies to bring in talent from overseas, and it can be tough for foreign entrepreneurs to set up companies and create jobs in the United States.

Beyond immigration, FWD.us plans to campaign for policies that will produce more math, science, and technology graduates, and ensure every child gains a great education from high-quality teachers in accountable schools. It will also support scientific research to foster innovation and technological breakthroughs. These projects could create new jobs in America, and boost engineering instruction so thee next generation has a place in the world economy which is increasingly going digital.

Zuckerberg sums up the need for FWD.us, saying “In a knowledge economy, the most important resources are the talented people we educate and attract to our country. A knowledge economy can scale further, create better jobs and provide a higher quality of living for everyone in our nation.To lead the world in this new economy, we need the most talented and hardest-working people. We need to train and attract the best.”

To join with FWD.us and receive information on its initiatives, sign up on its web page, or read more details here.