While Facebook is building out a bolder role in mobile in the form of Facebook Home, it looks like it is also continuing to make acquisitions that will help bolster that strategy overall. We have learned that in the lead-up to the launch last week, the social network appears to have quietly picked up Osmeta, a Mountain View-based mobile software startup. Osmeta had yet to launch a commercial product, and it is not completely clear at this point if this is an acqui-hire or a technology deal as well.

Update: A Facebook spokesperson has now confirmed the acquisition, with no further comment. Original story continues below.

This is what we’ve been able to piece together:

— Osmeta has been around since August 2011. It was co-founded by Google/IBM alum Amit Singh, and IBM alum Mark Smith, and it had 17 employees — all engineers. It’s “about” page describes a team of “world-renowned hackers and highly accomplished researchers capable of herculean software engineering.” In addition to Google and IBM Research, other past employers included Yahoo Research, VMware and Facebook.

— A number of employees who had listed Osmeta as a place of employment are now indicating that they work at Facebook on their LinkedIn profiles. One of them specifically notes that he moved to Facebook after it acquired Osmeta in March 2013.

— The company had yet to publicly launch a product, but what it was working on is/was in the mobile space, and appears to be something that works across multiple devices — evidenced by a picture on its site of 25 pieces of hardware running on different platforms. It’s not clear if Osmeta’s technology has also gone over with Osmeta’s employees. 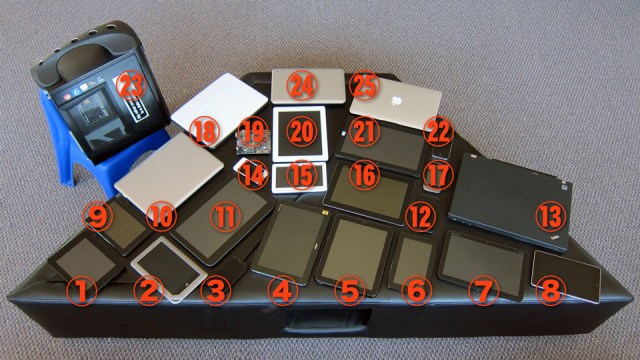 — The stealth product is was/is likely in the area of software:

“Between us, over the years, we have done pretty much ‘everything’ in terms of software creation, including several first-in-the-world type of magical things,” the site notes. “(Examples: Android, Chrome for Android, Chrome OS, Google Crawling, AdWords, ZooKeeper, BookKeeper, Pig (Hadoop), OSGi, Linux kernel control groups, network and other device drivers, cognitive computing, massive storage systems, unusual file systems, various types of virtualization, video game console emulation, and many, many others.)”

— Amarjit Gill, CEO of enterprise storage company Maginatics and himself a very successful entrepreneur (selling companies to Google, Apple and Broadcom), is one of Osmeta’s angel investors and a board member. Another VC mentioned on Osmeta’s site is Brian Long, a general partner at Atlantic Bridge Ventures. It’s not clear if he also backs the company, but Atlantic Bridge happens to be a backer of Maginatics.

— What does Osmeta mean? We have a guess from Amit Kumar, CEO of e-commerce app platform Lexity, who knows Amit Singh from studying together in Delhi, and appears to be the first person to have spotted the Osmeta/Facebook link. He goes back to Singh’s expertise in virtualization. “‘Osmeta’ – a reference to ‘meta operating system’ — potentially a virtualization technology that allows you to run the same ‘core functionality’ on top of any (potentially mobile) hardware?”

Kumar also puts forward the idea that Osmeta was more than an acqui-hire: “What if Facebook decided that, strategically, they need Facebook Home to transcend every mobile device – not just Android,” he writes. “Perhaps what Osmeta has built so far lets them spread Facebook Home across this fragmented device ecosystem, quickly, in a scalable fashion, and achieve a consistent, Facebook-centered experience, across all devices?”

“All devices” might be an overstatement, particularly considering that Facebook Home on iOS is a non-starter for now. (However, worth noting here that Singh’s experience includes some deep knowledge of Apple’s operating systems, working on Google apps for that environment.) In the meantime, Android alone offers a range of devices that you could see Osmeta helping Facebook to span.

While it may be debatable how and if Osmeta’s team will be working directly on making Facebook Home into the next home for Facebook, what is more clear is that Facebook is remaining aggressive in its push to acquire IP and talent (another example of that here) to try to ensure that what it does in mobile will position it as a leader, not a follower.