Y Combinator-backed Firebase is expanding the infrastructure that it offers to app developers with its first module — Firepad, a Google Docs-style text editor that allows you to collaborate with others.

To a consumer, that might not sound very exciting. After all, we’ve already got Google Docs. However, co-founder and CEO James Tamplin said that those kinds of capabilities are limited to big companies with “a ton of Google-quality engineers.” With Firepad, however, developers can add text editing and document collaboration to their own apps without too much extra work.

To build Firepad, Tamplin said his team had an advantage, because “we’ve got most of the pieces in place already.” Building on top of the existing Firebase platform made things “significantly easier,” but he added, “It still wasn’t trivial.” Firepad is a full-featured text editor, with capabilities like conflict resolution, cursor synchronization, user attribution, and user presence detection.

Firepad is an open source project, so developers can download the code and customize it as they please.

And there are apps already using the technology — initially for code editing, though you can imagine other uses as well. For example, Atlassian is launching a free Firepad plugin for Stash, its tool for Git repository management, so that different team members can edit or review code together. (You can see a screenshot of the plugin below.) Atlassian developer advocate Rich Manalang said the plugin was created during one of the company’s ShipIt employee hackathons, and that he could “see [Firepad] being useful in a wide variety” of Atlassian products. 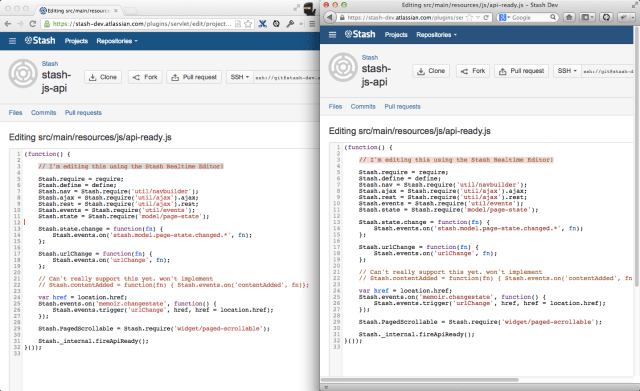 “Firepad is great because we don’t have to worry about building the backend in order to support real-time synchronization of a document’s state,” CEO Andrew J. Solimine told me via email. “It enabled us to build our collaborative code editing in just a few days, where it might have taken us weeks otherwise.”

Tamplin added that he plans to expand Firebase’s capabilities by releasing more modules in the future. Firepad is included in the Firebase pricing plan — the platform is currently free, but when the public beta ends, the company will charge based on bandwidth, storage, and the number of users.

To see collaborative editing in action, you can visit the Firepad site and play around with the group document on the front page.