After years of rumors, the Facebook Phone aka the HTC First finally launches April 12th for $99 on AT&T. It’s light and supple, plus comes with a suped-up version of Facebook Home pre-installed that pipes in non-Facebook notifications, but the 5MP Camera is a let down. If you’re highly social, want a mid-range handset, crave email alerts, and aren’t a photo buff, the First could be a great fit.

Considering this is Facebook’s first time really getting its hands dirty with a handset, I was very impressed with the First. Its comfy feel and soft edges make it a joy to hold. The 720p, 341 PPI screen is sharp, though not blazingly bright. 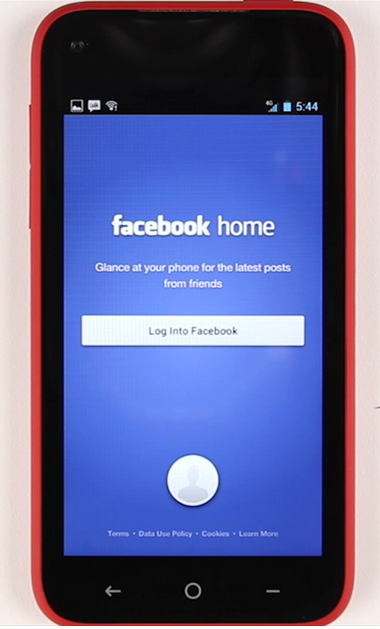 Facebook’s launcher replacement runs great on the First’s modified version of Android Jelly Bean 4.1, which is responsive and fun to play with. Home’s Facebook Chat/SMS multi-tasking is a game-changing efficiency booster, and the detailed screen makes laying back and watching Cover Feed photos stream by very relaxing. Unlike the downloadable version of Home that becomes available for five other handsets on Friday, the optimizations made to Android let the First display notifications from any app on your Home/lock screen, rather than just those from Facebook.

But in getting the price down to $99 on contract, Facebook and HTC sacrificed camera quality. Its 5MP can’t compete with the 8MP of the cameras on the iPhone 4S and Samsung Galaxy S III which crowd its price range. Home also buries access to camera beneath an extra tap, which might make you miss some spontaneous candids. You can disable Home completely, but that kind of defeats the purpose.

Video Review: Hands-On With Everything

Hardware To House Your Friends

When I first got my hands on the HTC First during the demo session blitz after the launch event last week, I was so fixated on the Home software that the handset’s hardware kind of faded into the background. It wasn’t until I got my review unit that I realized that was the point. The First is designed to get out the way so you can focus on the people instead. It accomplishes that by feeling downright friendly in your palm.

The glass screen seems to curve down at the thin bezeled edges into the surrounding plastic case and its matte finish. There’s not a sharp edge to be found, nor any cold glass or aluminum. Rather than a triumph of industrial chic, the First feels cozy — dare I say sensual. It’s thin, and the plastic helps keeps the weight down despite the 4.3 inch screen. Between the rounded edges and sleek figure, it’s a breeze to slide into your pocket.

The First’s specs place it firmly in the mid-range handset market. That’s why HTC didn’t trumpet them too loudly at the launch event. But other than its camera, it holds its own in its class alongside the 4S and S III.

The LTE connection is very speedy, the screen is colorful and clear, and NFC is a nice bonus. The battery life is decent, but goes quick if you’ve got the brightness turned up to take advantage of Cover Feed. The last 15% of the battery seemed to drain infuriatingly quickly, which can be rough when you’ve been rationing and expect that much juice to get you to the end of the day. Thankfully the micro USB charger fills up relatively fast, though the phone won’t automatically turn back on once it’s banked sufficient electrons.

Here’s the First stacked up against the 4S and S III: 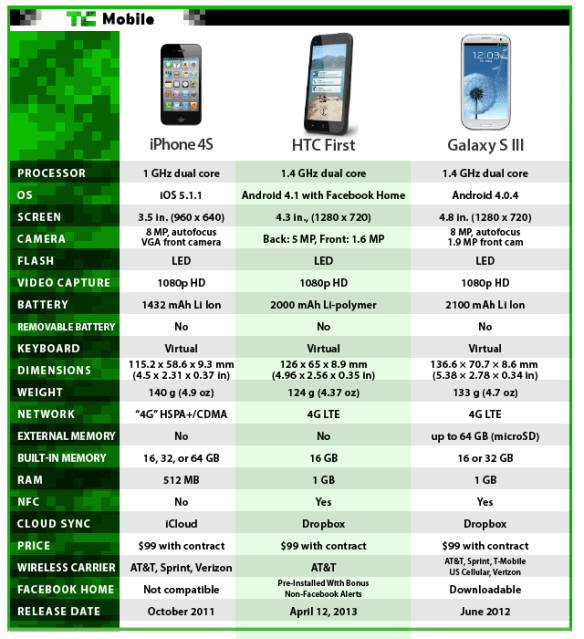 Facebook went out of its way to declare that Home doesn’t require a forked version of Android, and that it didn’t build some “Facebook OS” — except it did. Mark Zuckerberg noted that the First’s operating system was optimized for Home. Later, HTC confirmed to me it worked with Facebook to alter some of the Jelly Bean frameworks. This gives the HTC First’s version of Home a big improvement over the standard downloadable homescreen replacement app that also launches April 12th. 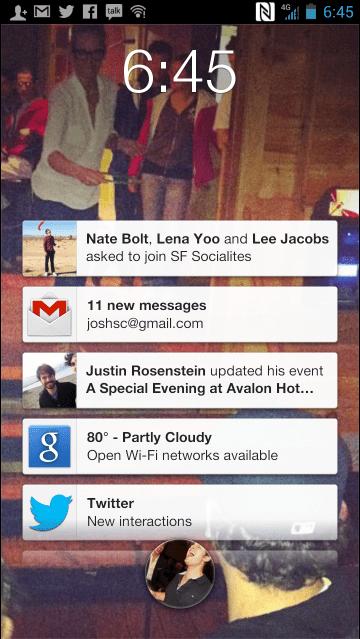 The First’s homescreen and lock screen can display big notification tiles for anything that appears in the Android notifications tray. This includes Facebook alerts about tags and likes, but also incoming emails, calendar appointments, Twitter replies, and more. The downloadable version of Home only shows Facebook notifications. Surfacing a wider set of alerts could attract more business-minded consumers, in contrast to the general opinion that the HTC First and Home are for teenagers.

As for the standard Home features, they work great, but are merely a reason to own some phone that can download it, which doesn’t have to be the First. Cover Feed fills your home and lock screens with a full-screen, one-story-at-a-time stream of the best updates from your news feed. It only works in portrait mode, which is a bit odd considering so many photos these days are shot in landscape. A Ken Burns-style slow pan effect makes sure you see most of an image in the 5 seconds before a new one slides in. If a friend shares a pure text update or link, you’ll see their cover photo behind words. The big images and large fonts on the sharp screen make Cover Feed a great laid-back experience, perfect for laying in bed. It makes the standard Facebook app’s news feed look sterile and stagnant by comparison.

My favorite feature of Home on the First was Chat Heads, the chat multi-tasking system. Incoming Facebook Messages and SMS appear as little bubbles of friends’ faces that persistently float over the top of whatever app you’re using as you navigate around the phone. Tap one and your message thread drops down in an overlay on top of your current screen, allowing you to look at something like a Map or Yelp, and then quickly open a conversation and relay information you just learned, bouncing back and forth without having to open and close the apps like with standard “multi-tasking” on iOS and Android.

Buried In The Basement

To leave Home, you tap and hold your profile picture at the bottom of cover feed and drag it in one of three directions. Left for Facebook Messenger, right for the last app you used, and up to open your app favorites screen. You can customize this with whatever apps you want quicker access to, or swipe right to reveal your full list of apps.

You can turn off Home with a few taps of of the Home settings menu to get a more standard Android experience. If you don’t though, there are a few things you give up. Rather than being able to access Google Now and search from the home or lock screen, you have to open the app drawer and slide right to get access to the search box. You can luckily hold down the Home button on the First to instantly conjure these though.

What’s more problematic is that the standard Camera app is totally buried in the app drawer so you can’t access it for spontaneous candid shots. When you do get it open, the 5MP camera takes soft, almost blurry images, and is even worse in low light. This is the worst part of the HTC First. 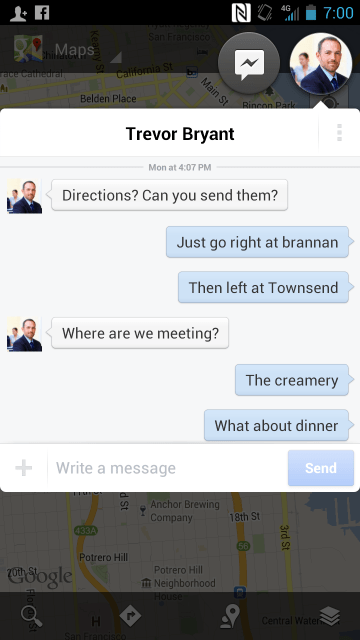 Facebook’s goal is to wrestle more control of the mobile ecosystem away from Apple and Google, and the HTC First could be a smart initial move. The device isn’t perfect, and considering Facebook’s recent focus on photos, the lackluster camera seems incongruent. But Facebook’s probably wasn’t expecting to hit a home run on its first swing. It has a lot to learn, and by working closely with HTC it likely gained a ton of insight on what to do next.

It could be a long time, if ever, before Facebook has the skills to make a premier smartphone to challenge the latest Apple and Samsung models. But the mid-tier market is large and that’s Facebook’s game — scale. It wants to connect everyone, not just those with hundreds and hundreds of dollars to throw down on a handset.

The HTC First is aptly named. It’s just the first “Facebook Phone”. Facebook has devised the Home Program where it will offer other handset manufacturers guidance on how to fiddle with the versions of Android they run to optimize Home. It might take six months, but I expect some OEMs will bite. If you’re deadset on getting a Facebook Phone, this probably won’t be your only option.

In the end, if you want the latest mobile technology, the First lags behind. Still, it’s a great device beyond the camera. So if the HTC First’s strengths align with your priorities, go ahead and pre-order.