Cisimple a startup that helps automate the build, testing and deployment process for mobile applications, is today exiting its beta and making its new testing platform available to all developers. The company is also the first to integrate with Kickfolio’s API, another newly launched startup which brings iOS applications to the browser using HTML5.

The Continuous Integration space is starting to heat up as of late, following CircleCI (the “Heroku for testing”)’s $1.5 million seed funding from Heroku’s founders and Eric Ries earlier this year. But where Cisimple hopes to differentiate itself from other players on the market, which to some extent include Atlassian Bamboo, CloudBees (for Java), and Travis CI, to name a few, is to specifically focus on mobile. (That’s the promise HostedCi offers as well, but the company seems to be stuck in beta.)

After sign up, Cisimple integrates with GitHub, scanning a developer’s repository for mobile applications. As developers write and update their code, the system can automatically build apps, run tests and then deploy apps to users through services like TestFlight, and new partner, HockeyApp, which added Cisimple integration just weeks ago. 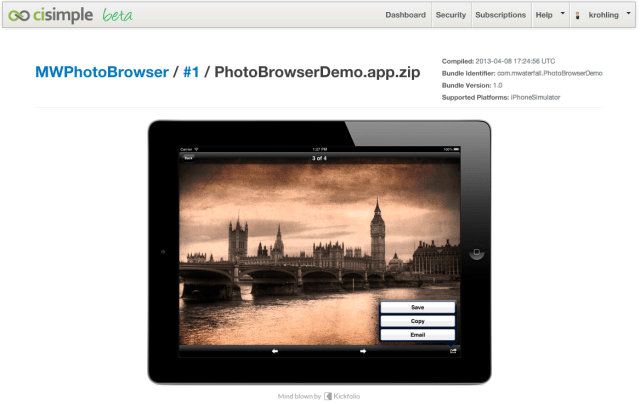 The AngelPad-backed startup first opened its doors to mobile developers this November, and had around 1,100 early adopters trying out the service. “Once live, we got a lot of feedback from users, and learned about what the pain points are for mobile developers, and what we’re well positioned to help with,” explains CEO Kevin Rohling. “One of those areas is testing – it’s really difficult right now. And doing it in an automated fashion for mobile developers, it basically didn’t exist….Well, it didn’t exist,” he adds.

On Cisimple’s infrastructure, the company can spin up simulations of a range of devices, then build, test and deploy their apps. Both iOS and Android are currently supported, but testing is limited to iOS only for now. Though Android is where more fragmentation lies in terms of form factors and OS/SDK versions, Rohling says the company is actually seeing more demand for iOS right now, which is why Android is on the back burner as the company gets off the ground.

On the testing platform, Cisimple does more than offer developers a log and pass/fail results, but can actually do interesting things like capturing video of the tests running on the simulators. “It’s another level of detail that developers who oftentimes set these things up themselves don’t get,” Rohling notes. “We try to make it easy as possible to get feedback about their applications – what’s changing, what’s breaking – and then very easily find those things, too. What we’re really doing is making mobile development more of an agile process, whereas today it’s typically disjointed and difficult,” he says. 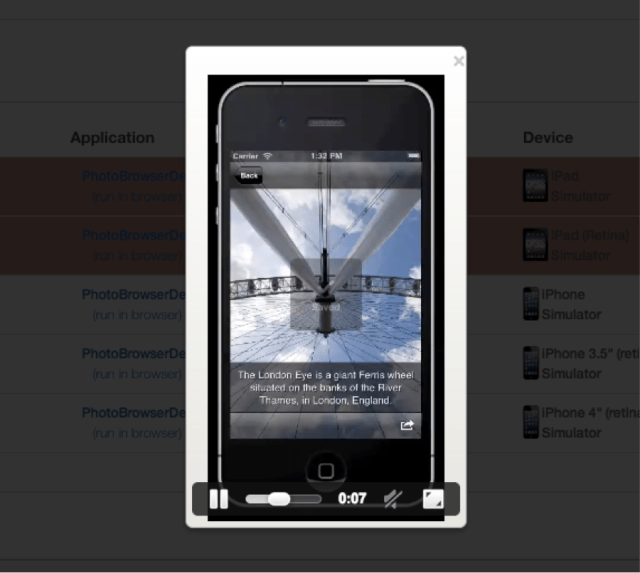 The Kickfolio integration is notable as well, as it allows developers to view the code for any build right in the browser. That means if a test fails, not only are you getting the results of that fail, you can actually launch the exact build, click around and reproduce the bug yourself. (You can view a few of Cismple’s customers here, and click around yourself in their Kickfolio-powered apps. Kickfolio is available to all paid users of the Cisimple service.)

Rohling declined to provide details as to beta traction metrics  saying it’s too early to comment, but he did says that several of the early testers have converted to paid plans now, primarily towards the indie side of the tiered pricing scale.

Developers signing up today can participate in a free two-week trial, or use a basic version of Cisimple supporting up to 30 builds per month without having to pay. Plans start at $19/month for indie developers, $99/month startups, and $999/month for large organizations. Sign up is here.