In our state of continued information overload, and because of the growing number of services which we have to check in order to keep up with the information that matters to us, things get missed by even the most active social media users. A new startup called Slim wants to change that, and is today launching an iOS application which allows you to discover and be alerted to the most important life events from your friends and colleagues – like births, anniversaries, job changes, and more.

Today, there are already a number of companies attempting to make sense out of the noise that’s out there by leveraging the data on social services, then applying their own unique algorithms to present things you shouldn’t have missed. For example, I have a folder on my iPhone dubbed “Summarize” filled with apps that do similar things to Slim (or at least play in the same general news summary space), including things like Prismatic, Clipped, Thirst, undrip, Wavii, Circa, Antenna, NewsWhip, and, until recently, Summly. Some of these are more focused on summarizing news stories, while others are meant to filter through your social media accounts, like Facebook or Twitter, for example.

But, combined, what they point to is that we’re now in search of tools that help us address the real-time nature of information flow and what it’s doing to our abilities to keep up and stay engaged. Just because news moves in real-time, that doesn’t mean people do.

Slim’s app is slightly different from apps that merely summarize Facebook or Twitter in that its focus, as CEO Yair Levin explains, is also on the business user, not only the consumer. “We are targeting business users who have little time but want to stay aware of opportunities and reasons to get in touch with friends and clients, active social media users who need a ‘safety net’ to ensure they don’t miss an important update from one of their networks and infrequent users who just want the highlights from social media,” he says.

The app uses natural language processing to build users a customized feed of all the important activity across Facebook and LinkedIn, and it sends out push notifications when a major milestone occurs. As you swipe through the updates that appear, you can also train Slim even further by starring the updates you appreciated and marking those you don’t want to see again. The app will learn your preferences in time, becoming more relevant the more you use it. 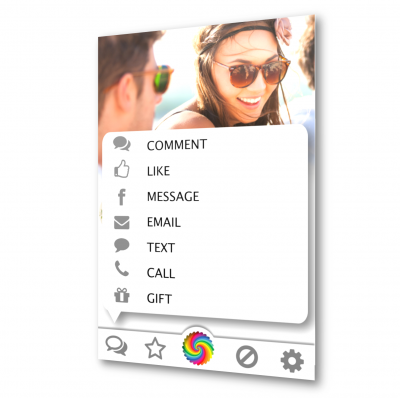 In addition, Slim takes things a step further than some others do, by allowing you to not only view the updates, but also respond. What’s clever here is that the app doesn’t just allow you to respond via the social network (e.g. by commenting on the post itself on Facebook), it also offers other real-world mechanisms for reaching out, including text messages, calls, emails, and it even connects you to Gifts.com if the announcement requires a gift. Handy.

Slim users can opt to receive a weekly or daily digest of their updates, as well, which works as another good way to stay on top of what’s happening, even when you haven’t had time to check the app or the social networks yourself. (Note that the weekly digest email is switched on by default.)

As of today’s launch, only Facebook and LinkedIn are supported, but the plan is to add Twitter, Instagram, Google+, Salesforce and Yammer in the next month or so. Based in San Francisco, Slim’s co-founders include two Israelis, CEO Yair Levin and CTO Zeev Vax. Currently a team of four, Slim has closed on $200,000 in seed funding from G7 Ventures, and the round is ongoing.