Educational publisher Elsevier is diving deeper into the world of open and social educational data: it has bought Mendeley, the London/New York-based provider of a platform for academics and organizations to share research and collaborate with others via a social network. The terms of the deal have not been publicly disclosed but we understand it is for a sum between $69 million and $100 million. We first broke the news of this deal when it was still being negotiated, in January.

The acquisition will heat up competition between Elsevier and other large publishers moving into ed-tech, among them Thomson Reuters, which owns EndNote, a competitor to Mendeley.

Mendeley is both a technology/platform acquisition as well as an acqui-hire for Elsevier. CEO Victor Henning, one of the three PhD co-founders of Mendeley, tells us in an interview that all of Mendeley’s 50 staff are coming over to Elsevier, and Henning will become VP of strategy for the company — a sign that Elsevier may be gearing up for more activity and possibly acquisitions in this space. (Picture of that Mendeley team taken earlier is below, complete with kitschy hologram.)

Olivier Dumon, MD of academic and government research markets at Elsevier, says that the company does not plan to merge Mendeley with existing Elsevier products that once used to compete against it, such as Scopus, “but we will integrate it better.”

Elsevier notes that in some regards it’s been working with Mendeley since 2009. “Elsevier has referred users to Mendeley, invited Mendeley to build apps on ScienceDirect using its open APIs, and sponsored Mendeley’s Science Online London conferences on Open Science,” the company said in a statement on the acquisition.

Mendeley — which was founded in 2008 and has raised just under $12 million in funding from investors including Access Industries, Passion Capital, and Tom Glocer — will keep running both its main platform as well as its Institutional Edition, aimed at helping universities and other large organizations track research and what’s being read in real time. Mendeley currently has 2.3 million users on its platform (up from 2.1 million in January), as well as 24 “high profile” institutions across North America, Europe and Asia. The plan is to expand the amount of free services offered across those, such as doubling the amount of storage for individuals to 2 gigabytes.

It will also keep its API free and open to use: that API today is used by some 300 apps, up from 260 in January.

Henning says Mendeley will continue to source data from different places — not just focus on what’s published or owned by Elsevier. “If people want to source the latest research on neurobiology, it wouldn’t make sense to limit this,” said Henning. “Elsevier will help us by enriching our content, but when it comes to other publishers it will also increase the transit routes into them.”

The acquisition also will mean that Mendeley can shift gears a bit. In the past, it charged users for extras like more storage space, usage packages for larger teams and so on, services that helped the company triple its revenues in the past year. Henning says that if it had remained independent there would have been more of a pressure to push revenue generation even more. “But I think with Elsevier we can take a longer term perspective,” he says. “What do our users want, rather than having to monetize too early. The focus will be to growing our user base rather than trying to monetize right away.”

As part of that, Mendeley also now wants to focus resources on some projects that it has been wanting to tackle for some time. The company already has a strong use on iOS devices; now it will be looking to launch an Android app later this year.

When we first broke the news that the two companies were in acquisition talks, I noticed a lot of negative chatter in the comments of the story and elsewhere — in fact you might argue that some of the sweetened deals such as increased storage are there to help hold on to skeptical users — with many concerned that the product would become too proprietary or commercial as a result. Henning is insistent that this won’t happen here.

“If you look at any acquisition, whether its Mailbox getting bought by Dropbox or us, people are always anxious about what will happen to a service,” he says. “In our case it will accelerate our vision.”

Update: Since posting last night, Mendeley’s published a Q&A on the deal here, and I’ve had a couple of others getting in touch passing on other information on price, with one, claiming to be close to the deal, suggesting a lower sale price of €50 million ($65 million). 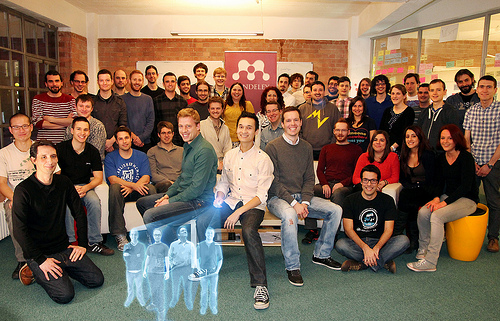