If you haven’t heard of Whisper yet, get ready to. It’s the latest social app to capture the attention of a huge — and growing — audience of users, as well as the attention of a group of investors. So far, the startup has raised $3 million in Series A funding from Lightspeed Venture Partners and others.

At the heart of Whisper’s app is the ability to anonymously share secrets with others. Those secrets take the form of photos that users can overlay text on top of. It looks a lot like the long-running PostSecret website, which has been running for years, but Whisper brings in a whole bunch of features that make it into a more full-fledged social network.

Whisper co-founder Michael Heyward told me by phone that the app was developed as a side project at secure messaging startup TigerText. Developing it with co-founder Brad Brooks, he saw Whisper as a way to enable users to share parts of their lives that they didn’t feel comfortable putting on social networks that were tied to their real identity.

“When you look at any of these identity-based social networks, people are so concerned about their image that they only post really positive things,” Heyward told me. The result is that people drastically overestimate the happiness of the other people around them, while underestimating the problems that they share. “We saw a huge white space of things that people were not publishing, and wanted to give people a place to share these things that they wouldn’t feel comfortable putting out on social networks.” 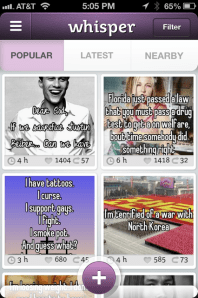 So Whisper was born. While it has some of the spirit of PostSecret, the real-time, mobile aspect of the app enables its users a way to communicate with one another that PostSecret never provided. In addition to providing immediate tools for replying publicly to other users, it also gives users the option of messaging each other privately — if they’re willing to pay for it.

Putting private messaging behind a pay wall not only has helped to drive revenue for the startup, but more importantly, it ensured the quality of the content that users shared. Heyward says the team made the decision to make messaging a paid feature more as a way to deter people from using the platform for solicitations or as a personal marketplace.

There’s also a location aspect to the app. Along with being able to see Whispers that are most popular and those which are newest, users can also see those which have been posted “Nearby.” Heyward tells me that Nearby is a relative term. The app is architected so that the radius of Whispers dubbed nearby is determined by the volume that have been posted, so that users should never feel like they’re in an empty room.

While trying to remain somewhat under the radar, the founding team has been building its user base, trying to spread the word mostly on college campuses and through university newspapers. But it’s also seeing pickup with other types of users, most notably with members of the military, including many in active duties in the war zones of the Middle East. 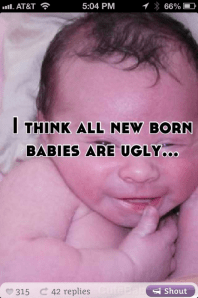 Nevertheless, with a limited amount of actual marketing, the app has grown extraordinarily fast. According to Heyward, the app has seen its number of users and posts doubling every month since publicly launching last November. And at the same time, it’s seeing its absolute number of page views and messages ramping up, as well.

Whisper saw more than a billion page views on the app last month, and has about 800,000 private messages sent each day. Users are incredibly engaged, opening the app on average about six times a day and spending more than a half hour checking out content through the app out of each 24. So with all that usage, it’s no big surprise that investors jumped on the opportunity to back Whisper.

Lightspeed first noticed Whisper in the App Store on a Monday and Liew met with the team the next day. By Friday they had a term sheet ready to sign, with Liew flying to L.A. on Saturday to finalize the deal. At the time it invested, Whisper was doing about 500 million page views per month, with each session being about 20 page views. “When you see that sort of engagement, it shows that the content really is compelling,” Liew wrote in an email.

Liew compared his interest in the application to a tiny little company called Snapchat that his firm invested in last year. For Liew, being able to provide a differentiator that is orthogonal to what Facebook stands for — i.e. creating a “journal of record for your life” through your real identity — is an important part of doing social in a way that Facebook can’t replicate.

So will Whisper be the next Snapchat? While it’s grown quickly over the first several months of downloads, it doesn’t necessarily play in the same arena. And the Whisper team of 10, with some VC backing behind it and revenues from messaging, is looking to continue to expand.

The app is currently only on iOS, and according to App Annie, downloads have stalled a bit. But Whisper is looking to add Android soon. Once that happens, it’ll open up to a whole new group of users who don’t currently have access to it. At that point, the sky’s the limit.