San Francisco-based ToutApp, a company helping sales teams streamline their email communications, has raised an additional $920,000 in seed funding from 500 Startups, Founder Collective, Scott Banister, Esther Dyson, and other angels. In conjunction with this new round, ToutApp is also launching its real-time sales communications dashboard for email, allowing individuals and teams to view detailed analytics around their day-to-day email activities.

Instead of raising a Series A, ToutApp had an open note over the past few months, founder and CEO TK Kader tells us. “We didn’t go for a Series A because over 2012, we found a goldmine – a brand new category around sales communications which is, for salespeople: email, phone calls and social. We’re wrapping it all together and helping them manage that,” Kader explains.

He says that the company is actually poised to break even in a month or two, but raised the funding mainly to double its staff over the next few months, with hires in marketing and sales, as well as engineering.

ToutApp is different from the software used by marketing professionals for tracking and email analytics, like MailChimp and Constant Contact, says Kader, because the system integrates directly into Gmail, Google Apps, Outlook and Salesforce, in order to help you track your day-to-day emails.

“When salespeople are doing their first outreach or following up on a lead, or when entrepreneurs are raising a round and are following up on their investors, they’re not sending MailChimp emails,” says Kader. “They’re sending daily emails right from Gmail. What we do is add analytics around that.” 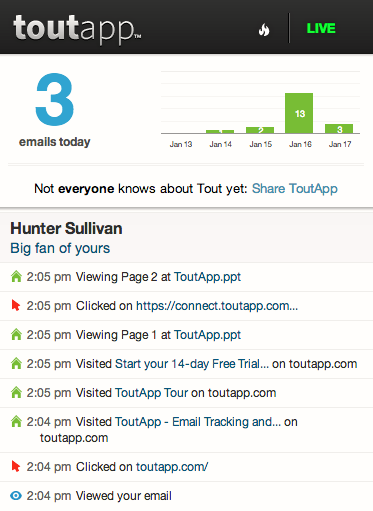 ToutApp offers a number of useful tools to better manage and keep an eye on those communications, including support for customized email templates, calendar integration for scheduling meetings, the ability to attach files then track their opens and views in real-time, and more.

There’s also a “live feed” option at the top of the email inbox, providing users with a real-time stream of email activity, showing you who has opened your message, what links they’ve clicked, when they viewed the presentation you sent, details from their social profiles, and more.

Knowing when the recipient is engaged with your message can help ToutApp’s users know when to  follow up – for example, by sending another email or placing a call.

The newly launched real-time analytics dashboard, based on Twitter’s open sourced Storm technology, is most helpful to sales teams, as it shows details of everyone’s engagement metrics. This includes things like which email templates were most used, which links were most clicked, which customers (by domain) were most engaged, which team members handled the most email, and a lot more. This analytics feature is available to anyone on the paid plans now. 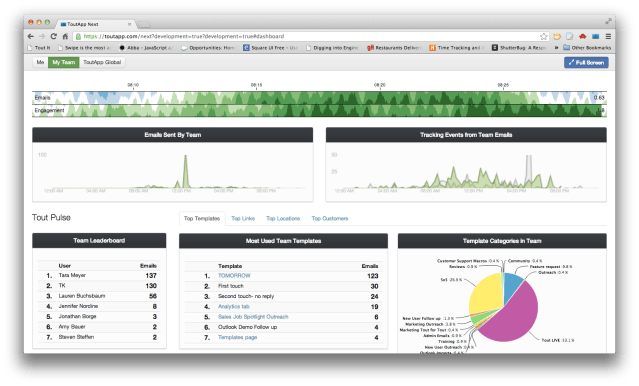 “We’re starting to get into the whole predictive space as well, by tapping into all the email data” says Kader, explaining what the new analytics technology brings. “We’re saying, based on what we know, here’s what we think is going on in terms of what’s most likely to succeed and least likely to succeed,” he adds.

Today, ToutApp has more than 45,000 total users on its platform. Some of those are free, but a “significant number” of individual users making heavy use of the system end up on the $30 per month paid plan. An enterprise option ($250/month) that allows a team manager to track, view reports and analytics, as well as create, share and collaborate on custom email templates, is also available.

ToutApp is planning to expand into messaging customers and leads over Facebook and Twitter. But email is still the company’s main focus. “Email is how you close connections and forge deals,” says Kader.

ToutApp has $1.2 million in total outside funding, including the new round.