A couple of new Apple patent applications published today (via AppleInsider) show how the company might be thinking about competing with recent innovations from other big tech companies with similar, but different designs. The first is a filing that describes a convertible MacBook design, with a touch-sensitive screen that separates from the base. The second is a method for navigating a Street View-style view of virtual maps, complete with a twist that allows it to go inside buildings, too.

The first design for a convertible MacBook may look familiar, since it actually resembles a lot of designs available from Windows device makers, and some previous Android tablet designs. The screen detaches from the keyboard and body portion, which isn’t in itself terribly unique, but the screen in Apple’s version communicates with the brains in the base via Wi-Fi, Bluetooth and other wireless communication protocols, meaning all the serious computing work is still handled by the traditionally located GPU and CPU. The screen itself is touch-sensitive, but doesn’t act as a standalone tablet in quite the same way it does in some new Windows device designs.

The screen also can charge wirelessly via the same kind of tech used in induction charging, drawing power from the base. What Apple describes here isn’t so much a convertible tablet, but more of a MacBook with a screen that solves the clumsy issue of how to use touch effectively on a notebook by allowing it to temporarily come off the base for more ergonomic touch-based interaction. Apple has talked about how touch doesn’t work on a traditional computer form factor in the past; this is one way around that. 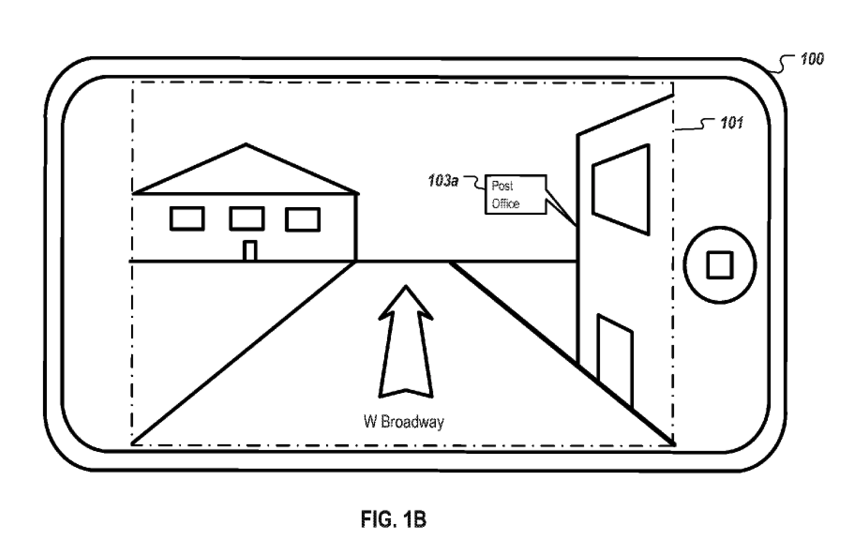 Another patent application published today could give a clue as to where Apple is headed with Maps. It describes a navigation method for a Street View-style look at the world from the perspective of someone walking the streets themselves. The difference between Apple’s patent and existing Google Street View navigation is that Apple’s is motion controlled, treating the environment as a panorama, which can be navigated based on motion detection from onboard device sensors to let a user truly experience a virtual “walk” through the streets of a city.

There’s been little evidence to suggest Apple is deploying tech to gather its own Street View-style imagery for Apple Maps thus far, but another recent development at least makes sense given the context of this patent. Apple recently acquired indoor mapping company WiFiSlam, and this patent also describes making use of the system to map and navigated indoor environments, too, so that users could go “inside” select buildings. It was originally filed in September of 2011.

Both these patent applications seem more like Apple hedging its bets than reflections of any immediate upcoming products, based on recent reports. But they also address issues that could become or are already competitive sore spots for the company, so there’s still a decent chance we may eventually see them make their way to shipping products.