Bufferbox, the Y Combinator company based in Canada that aimed to fix all of the issues that we have with receiving packages, has started to tease out a San Francisco Bay Area launch. Google acquired the company for a rumored $17 million to $25 million back in November with little or no discussion about the future plans for the product.

It’s clear that this could be a huge part of Google’s recently announced ‘Shopping Express’ same-day delivery service. Want to pick something up from a Bufferbox instead of having it brought directly to you? No problem. Middle men are completely cut out. The service has been operating without interruption in the greater Toronto area, but this area of California would be more than just a test.

We know that the current package delivery system here in the United States is broken, and the government-funded postal service is pulling back on things like…delivering on the weekend. Google is clearly getting into the space in a big way, and the tease on Bufferbox’s homepage, which probably picked up my browsing location, says it all:

Right now, all you can do is give them your email address to “pre-register,” which gives Google a pretty good idea of the demand for the service.

We’ve reached out to Google for more details, and will update if we do hear something more. This is definitely a space that we’re tracking closely, as another Y Combinator company doing something similar, Swapbox, recently launched in the Bay Area. 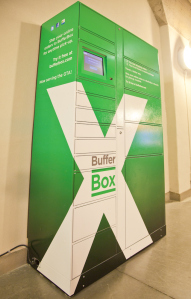 Instead of shipping something to your address, it goes to your Bufferbox, so that you can pick it up whenever you like. Right now, when you have something shipped to you and miss the delivery person, you’re pretty much screwed and have to wait for them to come back, or worse, go pick up the item yourself at a factory. If your package does get delivered, it just sits on your doorstep, being gawked at by your neighbors.

This is a bit similar to the notion of having a P.O. box, but it isn’t a box or address that is static. You can get deliveries to any of the locations that you want. Additionally, these things should be available in the open, so you can get your packages at any time of the day or night, rather than before the post office closes.

As we know, testing things out in the Bay Area is something that every company out here likes to do, including Google. This could be a booming business for the Mountain View company, as this is something that both consumers and small businesses would use repeatedly. It’s also a service that could be integrated into all of its current offerings. Imagine getting shipping notifications dropped into Gmail or your regular notification bar the second that it hits your Bufferbox. Or, imagine the tracking capabilities that Google could unleash, slapping the whereabouts of your package on Google Maps in realtime.

That would be cool.