Former Windows Phone developer evangelist, Charlie Kindel, has joined Amazon to head up an undisclosed project. Kindel left Microsoft in mid 2011 to work on his own startups but, according to his LinkedIn profile, is “now at Amazon working on something wonderful”. The profile lists him as ‘Director, something secret’ at Amazon in Seattle. That something secret may be mobile-related, judging by another paragraph of description which reads: “I’m building a new team going after a totally new area for Amazon. I’m hiring cloud and mobile developers and testers, program managers, and product managers.”

At Microsoft Kindel was a high profile platform evangelist for Windows Phone, before his rather abrupt departure to do his own thing. While working for Redmond, Kindel frequently trash-talked Android, with a particular penchant for criticising the fragmentation of Google’s OS. But after his departure from Microsoft and Windows Phone he has blogged about the opportunities presented by a fragmented Android platform — not for Google, but for others to compete and innovate — so if he has joined Amazon to work on building a smartphone powered by a fork of Android, a la Amazon’s Kindle Fire tablets, then it’s an area he’s been preoccupied with for a while.

Kindel joining a company that makes a product called the Kindle on a day traditionally associated with fools (April 1st), gave rise to speculation that the entire announcement was an elaborate prank — fuelled by Kindle posting his own April Fool about how he was joining Amazon to build the “Amazon Kindle Charlie… Amazon’s entry into the hotly contested home server market”. However a note before his faux press release says “part of the following is true” — and Kindel has also confirmed he has genuinely joined Amazon via Twitter: 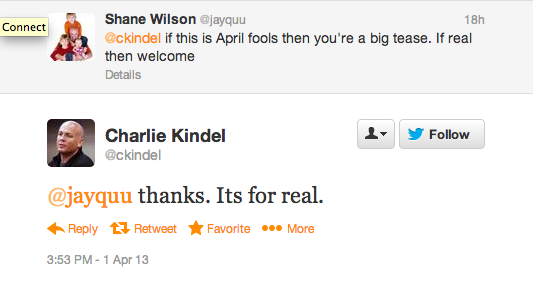 Rumours that Amazon is working on building a smartphone have been doing the rounds for years, although suggestions of a 2012 unboxing proved to be off the mark. Bloomberg also reported Amazon phone rumours last summer. More recently, a deal between Amazon and carrier billing company Bango also hints at possible preparations for a smartphone — although Amazon of course is remaining tight-lipped on the phone rumours.

If Amazon is building a smartphone, the focus — like its Kindle Fire tablets — will be on extending the reach of its ecommerce services and Android app store, rather than on trying to make a profit by flogging smartphone hardware. In February Amazon announced it would be launching a virtual currency for in-app purchases on Kindle Fire — and will conduct a big Amazon Coins giveaway next month to encourage customers to buy apps and in-app purchases to help bolster its mobile devices ecosystem, noting at the time: “Amazon Coins is the latest in a series of new features and services for developers that make Amazon the most complete end-to-end ecosystem for building, monetizing and marketing their apps and games.”

By creating and controlling its own virtual currency, Amazon could throw the levers of incentive in various directions — so Amazon-branded mobile device usage reinforces its online ecommerce business and vice versa. It’s pretty easy to imagine Amazon Coins being extended to allow users to purchase physical goods on Amazon.com, say, or the company creating a loyalty scheme whereby buyers accrue Coins by making Amazon.com purchases which can then be redeemed against Amazon mobile apps.