Dutch startup SoSocio has raised $600,000 in second round funding from a European consortium of private investors to expand the reach of its Facebook Photobook application. The app lets users create digital and paper-based photo books and cards out of their social snaps. The consortium of investors is led by VC Brooklyn Ventures from The Netherlands, which also funded SoSocio’s first round.

SoSocio, which was founded in 2011, has raised $765,000 to-date. It said it will be using this latest funding round to fuel international expansion. Currently its products can be ordered around the world but parts of its site are in Dutch, limiting its reach. International expansion will “primarily focus” on Germany, France, the U.K., Italy and Spain to start with, followed by the US “later on” — where it said its app is already gaining “some traction” (but would not break out specific user numbers).

Discussing general usage, CEO Wouter van den Berg said SoSocio is seeing “about a thousand books a day” being created — although he would not disclose the percentage of those that are its paid-for print product vs free digital photobooks. In future, as user numbers grow, he said the startup plans to add more advertising in the app as another way to monetize the service.

It also has a third business model: SoSocio offers its tools as a white label service to traditional print companies. van den Berg said the proportion of printed photobooks via these third parties is “much higher” than via its own label offering — which he put down to “Facebook visitors liking to play around with the apps”. He argued that the white label service differentiates SoSocio from other similar startups that are seeking to sell products based on social networkers’ photo content, name-checking the likes of Blurb and Pastbook.

“Some of the larger photo services in The Netherlands and Germany… already use or are going to use over the coming weeks our app in their own design and connected to their own payment and print facilities,” he told TechCrunch. “We also offer our app to brands (mainly in travel) that like to offer the functionality to their clients (greeting cards during holiday, photo books right after) via Facebook, site and/or mail. Also some famous DJs use it to engage with their fans via Facebook.”

SoSocio will be releasing a new version of its app early next month, with an updated look and feel, and support for printing both photo books and cards. The app is fully HTML5 so it works across desktops, smartphones and tablets. 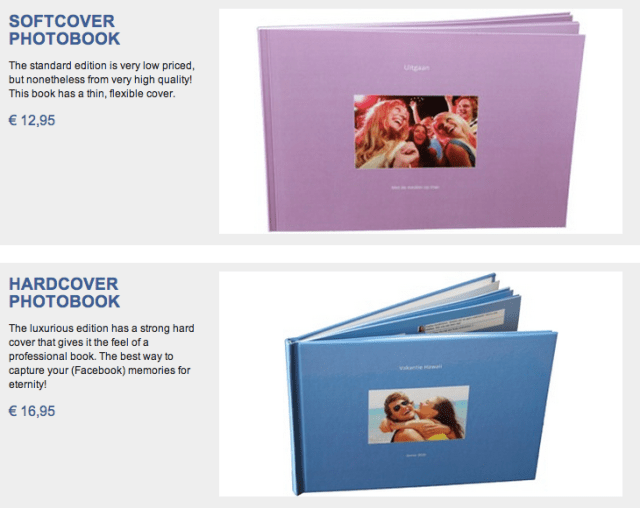