Strong growth in tablet sales is helping to drive overall growth in the global smart connected device market, according to analyst IDC, as the market reshapes itself with mobility at its core. Posting a new report for full year 2012 and projections through to 2017, the analyst notes that market expansion last year was “largely driven” by 78.4% year-over-year growth in tablet shipments — which exceeded 128 million units. But this is just the beginning for tablets: IDC expects tablet shipments to surpass desktop PCs in 2013, and portable PCs in 2014.

Overall, worldwide shipments of smart connected devices grew 29.1% year over year in 2012, and the entire market pushed past one billion units shipped, with a total market value of $576.9 billion.

Portable PCs are also project to take a declining share of the market, dropping from a 16.8% share in 2012 down to 11% estimated for 2017. The category will still see some growth, according to IDC, which is projecting 19.3% growth for portables over 2012 to 2017. But the powerhouse growth is in the tablets and smartphone categories — the latter projected to also grow by triple-digits (109.9%). 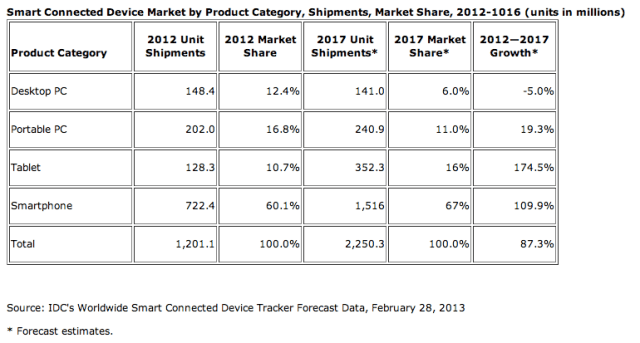 This year IDC said it expects the tablet market to reach “a new high” of 190 million shipment units, with year-on-year growth of 48.7%. While the smartphone market is expected to grow 27.2% to 918.5 million units.

“Consumers and business buyers are now starting to see smartphones, tablets, and PCs as a single continuum of connected devices separated primarily by screen size,” said Bob O’Donnell, IDC Program Vice President for Clients and Displays, in a statement. “Each of these devices is primarily used for data applications and different individuals choose different sets of screen sizes in order to fit their unique needs. These kinds of developments are creating exciting new opportunities that will continue to drive the smart connected devices market forward in a positive way.”

Powered by growth in the tablet and smartphone categories, IDC predicts the worldwide smart connected device market will continue to “surge” — with shipments forecast to surpass 2.2 billion units and revenues reaching $814.3 billion in 2017. By 2017, 83% of the market is projected to be composed of smartphones and tablets, up from 70.8% in 2012.

Returning to 2012, IDC noted that in Q4 of the year Apple significantly closed the gap with market leader Samsung in the quarter, thanks to the combination of its refreshed smartphone (iPhone 5) and new smaller tablet (iPad Mini). Apple took 20.3% unit shipment share in the quarter versus 21.2% for Samsung, according to IDC. On a revenue basis, Apple continued to dominate with 30.7% share versus 20.4% share for Samsung.