Once unfathomably expensive, thanks to scientific and technological advances, the cost of genome sequencing for your average Joe is dropping fast on its way to a big, historical benchmark: The $1,000 genome. We’re not quite there, but we’re getting close. This is exciting for a host of reasons, but particularly because it has the chance to usher in an era of personalized medicine, in which it will be far easier to discover if we have a genetic predisposition to cancer, Diabetes, and so on.

Companies like 23andMe are moving towards full-genome sequencing, while some 2,000 sequencing companies are already there. Yet, there’s a problem. These companies churn out piles of sequenced genomic data, but that data is still too complex for downstream research and clinicians to use. The number is projected to reach 8,000 sequencers by 2015, which means that the amount of valuable genomic data “hitting the lab floor” (so to speak) will only continue to grow.

This is where Bina Technologies comes in. Founded in 2011 by a group of Ph.Ds, big data junkies and bioinformaticians from Stanford and University of California Berkeley, Bina picks up and analyzes this genomic data that has been, until now, almost unusable. Through Bina, research universities, pharmaceutical companies and clinicians can get access to data that focuses on the rare variants in our genetics — in other words, those that cause our predispositions to cancer, newborn disorders, down syndrom, sickle cell, and so on.

Through the ability to better parse and make use of this data, the idea is that these downstream players can then facilitate significant improvements in patient care, treatment and, really, basic understanding of how the body works via insights at the molecular level.

Bina has previously raised a round of seed funding from a handful of Silicon Valley angels, including Bobby Yazdani (an investor in Dropbox, Google, Klout, Kissmetrics, Salesforce and others) and Farzad Naimi, and today the company announced that it is adding $6.25 million to its coffers in a Series B round led by Sierra Ventures. As part of the round, Tim Guleri from Sierra will be joining the startup’s board of directors.

With its new funding Bina plans to triple its headcount, half on the business side and half on the engineering side. Since the company’s official launch in February, they’ve started to see some traction, and the founders hope that the new funding will allow them to really begin turning those years of R&D into applications for the real world.

To get a sense of Bina’s applications, here are a few examples. As a part of its new financing, Bina announced a new partner in Liz Worthey at the Medical Center of Wisconsin, who focuses on newborn whole genome sequencing in the neonatal intensive care unit (NICU). In the next few years, Worthey and team hope to begin sequencing every baby born in the medical center, analyzing that data using Bina.

The Stanford Genetics Department, led by Dr. Michael Snyder, was originally piloting Bina’s platform, but has since become a formal customer, doing large-scale genetic analysis and research. Snyder used the Bina platform to analyze several hundred whole human genomes in less than 5 hours — something that has traditionally taken several days (or weeks) to do.

In each instance, both Snyder and Worthey said that they began using this technology because it offers scalability alongside on-premise security, which is interesting given that most of the other players in this space are pure in their cloud-focus. Bina opts for the hybrid approach. It seems that, for the clinical market, that security is a priority (as it should be), and cloud solutions aren’t yet seen as being able to provide that level of security. Whether that’s true or not for all sectors remains to be seen (AWS would certainly beg to differ), it seems to be the prevailing mentality in healthcare.

The $15 billion genomic research industry is on the verge of some enormous changes and as sequencing solutions begin to pump out more and more genetic information, it would seem that ther will be increasing demand for scalable genomic analysis. But not just any old Big Data port will do, it has to be vertical-specific. Technologies like this take years to develop, but in the long-run they could have a big impact on our own health — and medicine as a whole. 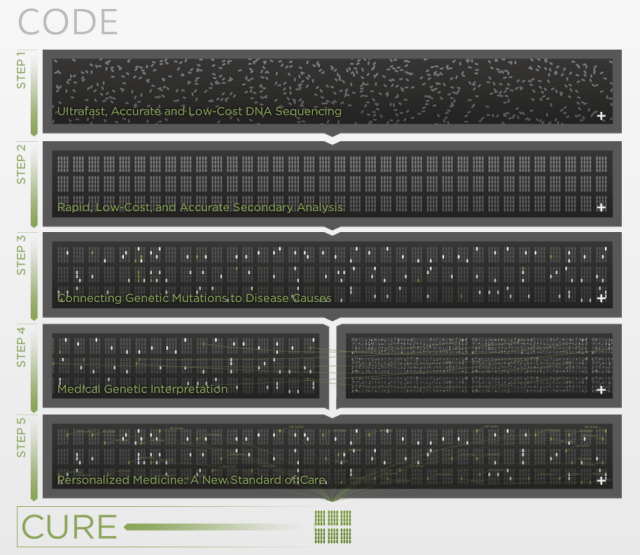