Facebook today is rolling out two more features for Pages used by brands and businesses and public Profiles for individuals with more than 10,000 followers: it is adding replies and threaded comments. The move — like Graph Search, designed to increase time spent on the site — confirms our report from last week, which we wrote about in detail, and which Facebook also later confirmed for us. 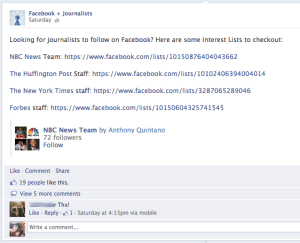 Both replies and threaded comments — which lets the most-commented-on or liked replies and those closest to your network gravitate to the top, while those marked spam sink to the bottom — had been in testing since November 2012, so a few accounts already had them in place. Today’s news means that they will now be rolled out across Facebook for desktop everywhere.

For now, the two enhancements are available as opt-in features; they will be turned on for all Pages and 10,000+ follower Profiles by default in July.

Facebook says it is pushing out the product right now, with this particular write-up, from Vadim Lavrusik, focusing on journalists’ pages, such as the one here to the right.

Because this update for now is only for desktop, that will mean that people who view the comments on mobile devices will not be able to reply, and comments will not be algorithmically sorted.

Direct replies will serve a couple of purposes on the social network. For one, it will give those Page and Profile owners more ways to use their pages. For example, they can use them to run Q&A sessions or informal polls about different topics or ideas. 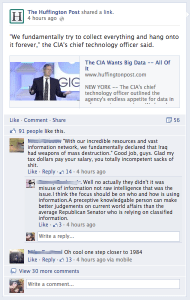 This will also potentially mean more time spent by users on these pages — something that benefits both Facebook and the Page/Profile owners. It also gives Facebook a little more interactive functionality that brings it closer to the kind of direct contact you get in Twitter, or the open forum feeling you get in Reddit.

All the same, rolling out these features to desktop, in a sense, was long overdue for Facebook. The option had already been available on Facebook’s third-party commenting platform, used on a number of other sites (TechCrunch had been among them).

One reason it has taken so long to move it to Facebook’s own Pages may be because while it does potentially improve engagement on posts, it will also mean more time spent moderating comments, so Facebook would have needed to see whether the tradeoff is worthwhile.