Last week’s Backed or Whacked column looked at a trio of small, easily attached bicycle accessories that could beef up your ride’s horn, assist in toting shopping bags, or add more secure footing to your pedals. This week’s column looks at some larger accoutrements that can help bicyclists with their burdens. Unfortunately, none of them could get over their fundraising hill. 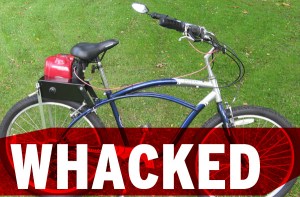 Whacked: RoadBug. One day, mechanical augmentations will have the power to turn us all into bionic super beings. Until the day insurance companies deny coverage on those procedures, though, we can mod our bikes to go farther and faster.

Hudson, NY’s James Brisciana had sought to put his 10 years of experience in the bicycle motorization business to produce the RoadBug, a friction-based moped conversion kit that can accommodate four-stroke engines from the likes of Huasheng and Honda. The kit was also available without the engine at just $99, a $50 discount off the proposed price. Unfortunately, the campaign ran out of gas with Brisciana attracting less than $4,500 of the $20,000 sought.

Whacked: Loko. It may be a coincidence that the bike cargo system dreamed up by Albuquerque-based Loko Bike Products has some verbal similarity to the Lego construction toys, but the bike add-on offers a dizzying array of expansion options nonetheless. Starting with a simple “V-rack” base unit ($99 for early adopters) that quickly attaches to and detaches from a bike, Loko is a modular, convertible, removable cargo bike rack system. The“O-mounts” on its surface can accommodate an impressive array of bags, boxes, banana seats and baby seats, electric or gas conversion options, folding 8″ or 12″ extensions called U-bars, and even ruggedized iPhone cases for capturing video of the ride. With about 15 days left in the campaign, though, only 36 backers have dipped into Loko’s tantalizing alphabet soup of V-racks, O-mounts and U-bars, and the Loko motion has stalled out at just over $4,000 – a far cry from its $75,000 goal. 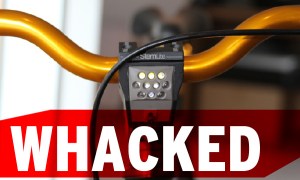 Whacked: StemLite. “Ow!” That’s the expression heard after you slap your head, forgetting to bring the clip-on bike light. Well, the eventual pain could be much worse if you decide not to turn back for it and go out less-than-gently into that good night. Reasoning that bikes, like cars, should have integrated road lighting, the duet of Nick Sweeney and James Voshell created the StemLite. The product replaces the bike part upon which the handlebar rests with one that integrates an LED light powered by three AA batteries. However, backers failed to deliver in the cold light of day, and the campaign ended with only $3,200 pledged of its $45,000 target. 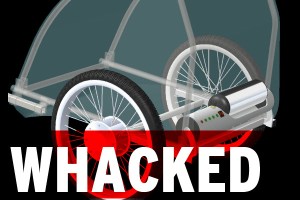 Whacked: Ridekick. When you were young and free, you’d scoot around on your two-wheeler dragging nothing but the wind behind you. But then life started weighing you down, becoming a big uphill climb. What if the weight on your shoulders could be placed behind your bicycle? And what if that weight could push you along instead of drag you down?

That’s the idea of Ridekick. It’s an electric bike trailer that can accommodate two small children and push you to the next destination through the unending series of errands you must run to keep the little ones healthy and engaged. The Ridekick, slated to be produced in Colorado, was to retail for $899, with a $200 discount for Indiegogo backers. However, the campaign didn’t quite go off without a hitch and ended with just $6,265 of the $165,000 sought.