Where are the users headed following news of Google Reader’s shutdown? To Feedly, it seems. We already heard the company announce it had passed half a million new users, but more importantly, Feedly is now winning on mobile, too. According to new U.S. App Store and Google Play data, Feedly is leaving competitors like NewsBlur and Reeder far behind. Even though Google Reader will remain for a few months more, Feedly became the No. 1 news app across all three top mobile platforms (iPhone, iPad and Android) this week. It even climbed into the “Top Overall” section within all three stores.

This data is current as of mid-week. Today, Reuters moved up on iOS to bump Feedly to No. 2 on iPad, and No. 4 on iPhone. On Android it’s still No. 1.

Also, the data is U.S.-only, so it doesn’t present a complete view of the situation. But it’s notable as to where the Reader-replacement race stands now in one of Google Reader’s top regions.

Ten days prior to the Reader announcement, the average daily downloads for the Apple App Store for Feedly were around 1,200 to 1,300, according to app analytics firm Distimo. Since the news broke, Feedly downloads have increased more than tenfold to over 16,000 per day, on average. 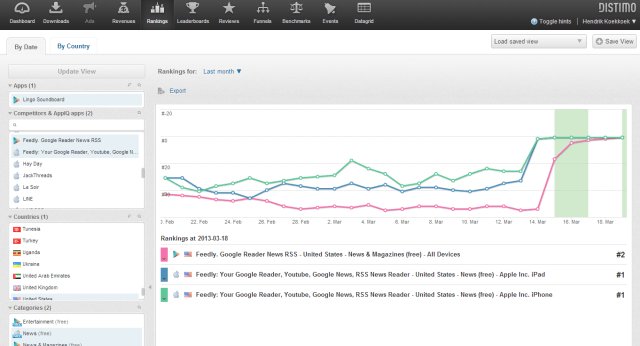 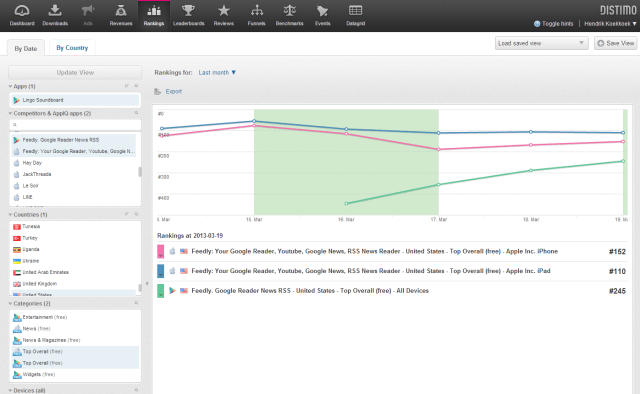 Competitor NewsBlur, which also has a mobile client, is currently generating 1,000 to 2,000 downloads per day since the news broke – Feedly’s pre-Reader shutdown levels, basically.

It’s worth noting that Feedly has been at the game longer, and has been preparing in advance for the end of Reader. It has a transition plan in place already. NewsBlur, admirably, is a one-man shop. It’s inspiring to watch Samuel Clay scale that thing on his own. And it’s open source, so it has that going for it. But a mission-critical app can’t go into maintenance mode after Reader is gone, so people may be nervous about NewsBlur right now.

By the numbers, it’s Feedly’s half million users vs. NewsBlur’s 60,000+, currently. Things, of course, could quickly change – and the horse race is not limited to these two.

People are also responding to the branding of “The Old Reader” (though it’s not really like the old one). It also struggles under the load, and the mobile interface needs work. Digg has pre-announced its intentions, but we know nothing of the final product. Black Pixel surprised everyone with plans for the return of NetNewsWire, which happens to be TechCrunch writer Frederic Lardinois’s preferred client. Reeder has a plan for D-Day, but limits itself to the Apple world.

There’s also a spreadsheet being passed around which lists about 50 alternatives to Reader, so no need to bore you by listing all of them here.

But only some are true replacements. Everybody with a remotely related news-reading service is trying to get a piece of the action these days. Zite, for example, very disingenuously posted last week that it had “rebuilt” Google Reader in six hours. That was seriously messed up. Zite is a news magazine. A news magazine is by no means a Reader replacement.

Feedly might not ever transition into a full Reader replacement, either. Founder Edwin Khodabakchian says he’s “trying to find the right balance” between what Feedly has built and serving the news of its new audience, which is demanding a minimalistic view of their feeds, like Reader offered. To some extent, he’s responding to their concerns. (And for those still not happy with the Feedly UI, there are always userscripts and Chrome extensions.) 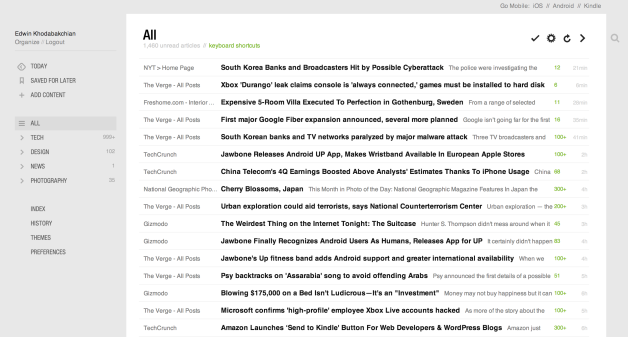 “Our goal is not to copy per se, but understand the behaviors and workflows and try to support them as best as we can,” Khodabakchian says.

He also tells us that Feedly has been working for the past five months on a very big mobile update, which is being approved by Apple right now. The app should be out soon – maybe a week at best.

“The private beta feedback we collected on that update is by far the best we have had over the last 18 months,” he says. And he promises that Google Reader refugees will appreciate the new title view that the app offers.