AppSurfer, an Indian startup working to bring Android applications to the browser so users can “try before they buy,” is today launching an Android application which lets users browse, test, then install the applications they like. The startup has also added a number of new features to its platform since its debut last fall, including support for tablet apps, accelerometer support, and the ability to share app demos to Facebook.

That latter option is especially interesting. As CEO and co-founder Aniket Awati explains to me, now when a user shares an AppSurfer link, their Facebook friends or followers can click the link and interact with the application directly on the Facebook Timeline. (Here’s an example). To be clear – these aren’t pre-recorded demos or videos, they are working versions of the mobile app itself, designed for use in the browser. 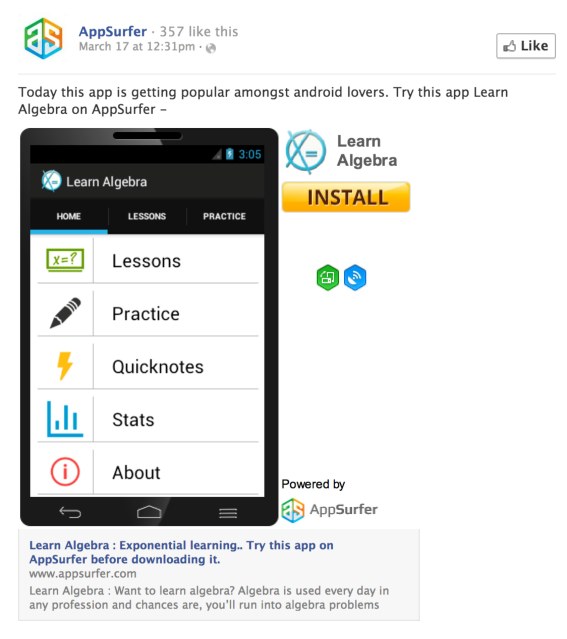 In fact, AppSurfer is a lot like an Android-focused counterpart to Pieceable, a startup Facebook acquired last summer. Since then, newcomer Kickfolio has come in to fill Piecable’s shoes, using HTML5 instead of Flash. However, like Piecable, Kickfolio is also iOS-only for now.

Meanwhile, users wanting to demo Android apps can do so in a limited way via Amazon’s Appstore for Android. But generally speaking, users are left watching trailers, viewing photos, and reading reviews to learn about new apps.

In addition to sharing apps on Facebook, AppSurfer also support list-making, allowing users to build collections of their favorite apps. Developers on the platform can pay a monthly fee for premium features like customizable widgets, private app pages, and more.

AppSurfer was originally conceived as a tool just for developers, but Awati said that after four or five months into building the service, the team realized that it had more potential as a consumer-facing tool. “Letting consumers use Android apps in a single-click from any platform and any device was going to give us access to a far larger market, so we changed tracks,” he told us in October.

Since going public, the company has signed up 5,000 developers, and now has 2,500 applications on its platform (up from 50 last fall), 20 percent of which are paid app. To date, over 130,000 individual app sessions have been run. On average, AppSurfer is showing a 15 percent conversion rate. And for apps which have over 100 views, conversions go up to 40 percent, on average. However, few of the apps today are what you would call top-tier applications. Most of them are games.

The startup has also added support for the accelerometer, so users testing apps on mobile can tilt and rotate the phone as they normally would. And it has added support for running apps on the tablet form factor and screen size. The company is planning to announce its Android application at DEMO India today. That app is available for download here.