Back in December 2011, Omada Health grabbed $800K in seed funding from a long list of notable investors, including NEA, Aberdare, Kapor Capital, TriplePoint Ventures and Esther Dyson. After a year of testing, the funding enabled the startup to launch Prevent, its flagship product and the “first-ever online diabetes prevention program for the general public,” Omada Health founder Sean Duffy said at the time.

And that, in a nutshell, has been the startup’s mission since it launched as part of Rock Health’s first batch of startups back in the fall of 2011. Thanks to the fact that Diabetes has become one of the most widespread diseases in the U.S. — the CDC estimates that one-in-three American adults have prediabetes — the startup set out to harness a new generation of research, behavioral science, design and digital tech to help fight what Duffy (and the CDC for that matter) call a growing “national epidemic.”

And today, the startup is adding a new round of capital to its coffers to help it continue the fight against diabetes, announcing this morning that it has raised $4.7 million in series A financing. Omada’s new round was led by U.S. Venture Partners (USVP), with participation from The Vertical Group, Founder Collective, NEA, TriplePoint Capital, Kapor Capital and a handful of angel investors.

The funding, Duffy says, will help support the widespread, commercial rollout of Prevent — the startup’s flagship product which launched last December. Prevent, for those unfamiliar, is a 16-week, online weight loss program designed specifically for those with “prediabetes,” a medical condition in which an individual’s blood glucose level is elevated but not at a level that qualifies for diabetes.

Without the proper care and treatment, over time, the condition can evolve into diabetes, which is significant when one considers the CDC’s estimate that 78 million Americans currently have prediabetes. On the bright side, intensive behavior modification programs that target weight loss at the time of diagnosis (of prediabetes), the CDC says, have demonstrated the ability to significantly reduce its progression into Type-2 Diabetes.

The Omada Health team based Prevent’s program on the growing body of research around behavior modification, particularly on the Diabetes Prevention Program — the NIH-sponsored clinical trial, which has become the most-cited Diabetes paper in the last decade, Duffy tells us.

With Diabetes (in some form) now affecting an estimated 43 percent of adults in the U.S. — which translates to a cost of $218 billion for the U.S. healthcare system — the Omada Health founder believes that the country is at a critical inflection point. Further evidence for which can be found in the fact that the average annual cost, per patient, of prediabetes is $443 (just in medical costs), an average which escalates to a whopping $9,975 for patients with Type-2 Diabetes.

Given the magnitude of the disease in the U.S., Duffy believes that Omada and companies like it have the opportunity to transform the methods by which the American health system prevents and treats obesity-related diseases. At scale, he says, this could equate to considerable cost savings for the healthcare system, potentially impacting millions via the Web.

Going forward, Omada Health will use its new funding to support the expansion of Prevent, along with leveraging its model to begin treating other, related diseases. As of today, Prevent is being deployed “within a select group of self-insured employers and providers in the U.S.,” the company said, with a more expansive roll-out expected to take place later this year.

For more on Omada Health, find it at home here. 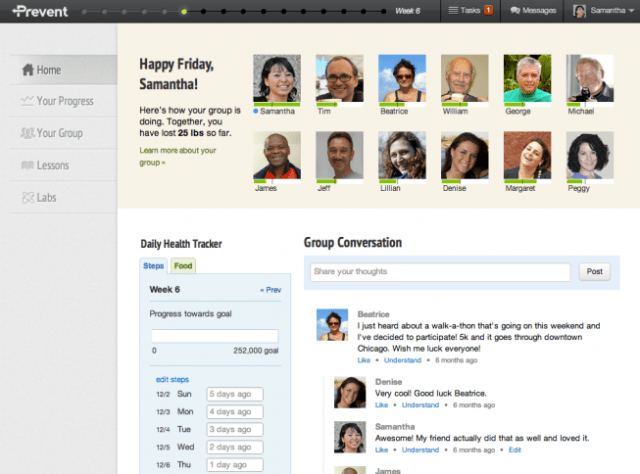