Spotify today confirmed to TechCrunch that it has finally completed the rollout of its new social following features that model music discovery after offline behavior — where you find songs through tuned-in friends and influencers. Here’s our hands-on demo and review of Spotify’s move to discovery through actual humans instead of algorithms.

Back in November, I wrote that sources told me Spotify planned to launch a Twitter-esque following feature for music discovery. Then at a flashy event in New York featuring performers like Frank Ocean and an after-party with Vampire Weekend, Spotify officially unveiled its “music graph.” But the rollout has been slow, and the redesigned Discover tab and instant previews features aren’t yet available to everyone. But influencer following is, and it’s a big step up for the on-demand music service. 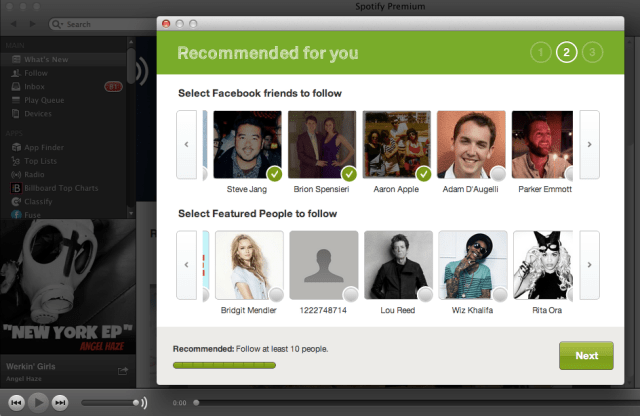 A Cure For Paralyzed Ears

Discovery is Spotify’s biggest problem. Its search box can be paralyzing. When you can listen to all the world’s music, where do you start? Spotify’s answer is “with what your favorite artists and most music-savvy friends are listening to” through the new Follow tab plus revamped profiles and an activity feed.

By now you should have received a prompt to update to Spotify version 0.8.8. When you fire it up the first time, you’ll get walked through the Spotify Social on-boarding. Congratulations, you’re now automatically following the artists you listen to most and people whose playlists you’ve subscribed to (though you can ditch them if you want).

Next, Spotify recommends you follow some Facebook friends, in contrast to the old version where your feed was clogged with listening activity from all your friends. This update makes a lot of sense, since just because you’re friends with someone doesn’t mean you respect their musical tastes. If you dig pop, don’t follow your hipster friends. If you aspire to be the first on your block who knows about the new buzz band, follow music blogs or buddies who live in London.

Finally, you’ll see suggestions of artists and influencers to get updates from, including bands like Pearl Jam, news outlets like Pitchfork, and celebrities like Mark Zuckerberg or Barack Obama. The process is breezy and doesn’t default you into too many connections. If you’re ever looking for new people to get recommendations from, you can click on the Follow tab in Spotify’s left navigation side.

Woo! Alright, now let’s listen to music — socially. These subscriptions populate the redesigned social feed in the Spotify right sidebar. It shows songs listened to, tracks shared, playlists updated, and more from the people you follow. At the top is a recommendation of a featured influencer to follow. The bar is a bit narrow so it cuts off track names but at least it wraps text to show you the full message when people purposefully share. 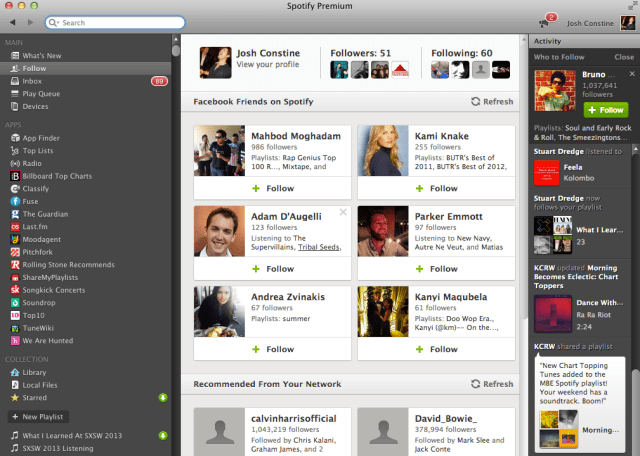 A single click of the play button in any story instantly plays that song or playlist without changing the page you’re viewing so you can quickly sample what people are bopping their heads to. There’s this oddly intimate feeling when you see that a rock legend like Lou Reed is listening to a song and you can join him. You feel immediately closer to them, like you’re getting a personal tour of their tastes.

If you want to dive deeper into someone’s style, you can visit their redesigned Spotify Social profile. For verified artists, this will show their standard discography and their most popular songs according to the Spotify user base. It’s a bit too subtle (I missed it at first), but you can click the “Spotify Profile” button below their name to switch to see their recent Spotify listening activity and playlists. The latter is all you’ll see for non-musicians. 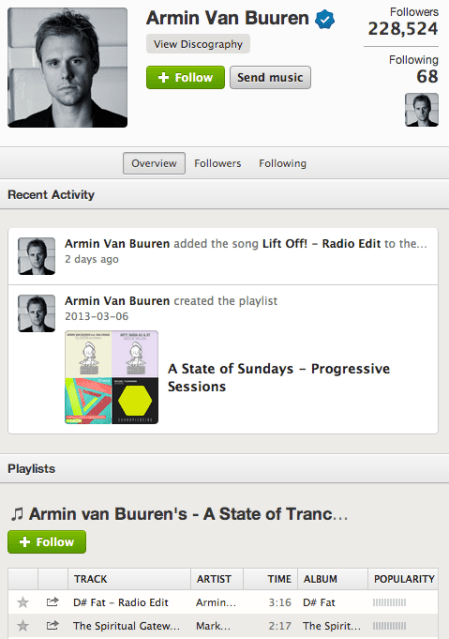 In days of old, you’d discover music from professional DJs broadcasting their picks on the radio and at clubs, or through one-to-one interactions. Though modeled after this behavior, Spotify evolves it by turning everyone into DJs without the need to do anything different. You, your friends, journalists, and celebrities simply continue the one-player Spotify experience by listening to songs and building playlists. But similar to the Facebook news feed, Spotify’s new social features create of sense of ambient intimacy around music. It’s like a town square, except filled with your personal music influencers, and they’re all holding boom boxes above their heads.

There’s plenty of room for improvement, though. Spotify used to let you “favorite” non-friends to add them to your feed, but there was no way to find these people. The social on-boarding and Follow tab are a step forward, but they don’t offer much context. I’d be a lot more likely to trust recommendations  if Spotify told me we love the same artists, or their playlist contains the song I have on repeat.

Considering their latest listens are in the feed, its strange and dysfunctional not to have someone’s listening history on their profile. The subscription recommendations atop the feed seem ill-targeted. I rarely listen to pop music, but I get suggested Katy Perry and Bruno Mars. When I was recommended a band I hadn’t heard of called The Script, I gave it a shot. What I heard was FM dial slime I imagine was concocted by removing anything edgy from Coldplay and replacing it with album filler by American Idol semi-finalists.

Social is relegated to the sidebar and feels disconnected from the What’s New homepage. Luckily, Spotify will eventually roll out its redesigned Discover tab, which combines tips from those you follow with hits and new releases from artists you don’t. Until then, discovery still feels a bit marginalized on Spotify. That’s a big contrast to competitor Rdio, which features multiple tabs of charts and personalized recommendations.

Despite these shortcomings, I’m already discovering new music through Spotify’s new social feed. Subscribing to Los Angeles indie radio station KCRW and British music blogger Stuart Dredge has helped me expand my taste. If an algorithm had recommended a sleepy crooner like Escondido’s “Black Roses”, I’d have probably skipped it 15 seconds in. But since the recommendation comes from someone I trust, I gave it an honest chance and fell in love with the lullaby. That’s how social music discovery should work, and it’s making Spotify sound sweeter than ever.