Sift Science, a Y Combinator-backed startup founded by former Google engineers, is today launching its fraud-fighting service based on machine learning – a system designed to adapt to the ever-changing techniques used by criminals online. The company is also announcing $4 million in Series A funding, led by Union Square Ventures. As a part of the funding, Union Square’s Albert Wenger is joining the company’s board.

The service is primarily targeting online marketplaces, payment networks, and e-commerce sites, where fraud is most prevalent. Businesses can integrate Sift Science’s technology by copying and pasting a small snippet of JavaScript code to their sites, the company says.

Co-founder Brandon Ballinger, who spent four years at Google before leaving to found Sift Science, already has experience fighting fraud at scale thanks to his experience fighting off malicious ads while with his former employer. He notes that five of the engineers at Sift Science are also from Google, some with backgrounds in search and ads, and three from the same team that worked to detect spam ads and scams.

“We realized that every site on the Internet had some types of bad users – some types of fraudulent users that they had to deal with,” he says of the inspiration for Sift Science. “And so what we decided to do was built [a fraud detection system] for the rest of the world.”

Ballinger co-founded Sift Science back in June 2011 with former college roommate Jason Tan, previously of Zillow, Optify and BuzzLabs. They later went through Y Combinator’s Summer 2011 program. When getting started, the founders talked to potential customers about spam, fraud and other malicious behavior, to see what sort of problems they were facing. There were already a number of anti-fraud vendors out there, Ballinger explains, so there was some initial concern was that the problem had, essentially, already been solved.

“But as we talked with people, we realized that it wasn’t solved at all,” he says. “Nobody was using them, and there were a couple of holes – things that existing products didn’t do. And one was ease-of-use.”

He says that today, signing up for anti-fraud systems is still somewhat complicated. “It’s not like Google Analytics. It’s not like Mixpanel. In order to use an anti-fraud system today, you actually have to go through a lengthy sales process; there are setup fees; there’s usually a minimum term,: he says, “and the APIs, too, are very complex.” Existing services often use SOAP APIs, and take months to integrate, so Sift Science offers a REST API instead.

The other big issue with the existing systems, Ballinger continues, is that they use a fixed set of rules. That is, they would flag transactions over a certain dollar amount, or every transaction from Nigeria, for example. But using fixed rules is a problem because Internet fraudsters don’t play by a fixed set of rules – they’re always adapting their tricks to stay ahead of the preventative techniques.

To give its customers the edge, Sift Science uses machine learning which adapts to the fraudsters’ changing tactics. Already, the startup has over 1 million different fraud patterns in its database, but will continually add to that, based on its learnings. Though how its algorithms work is something of the startup’s secret sauce, there are some generalities it offers as examples – like certain URL navigation sequences, IP addresses coming from Tor nodes, transaction times that occur at late night hours, and more – to give you an idea of what of what individual signals might look like.

Businesses can receive their fraud alerts via the provided API and/or email, and fraud scores are given a number to indicate their severity. Customers can also train the system by providing Sift Science with more information specific to their own service. 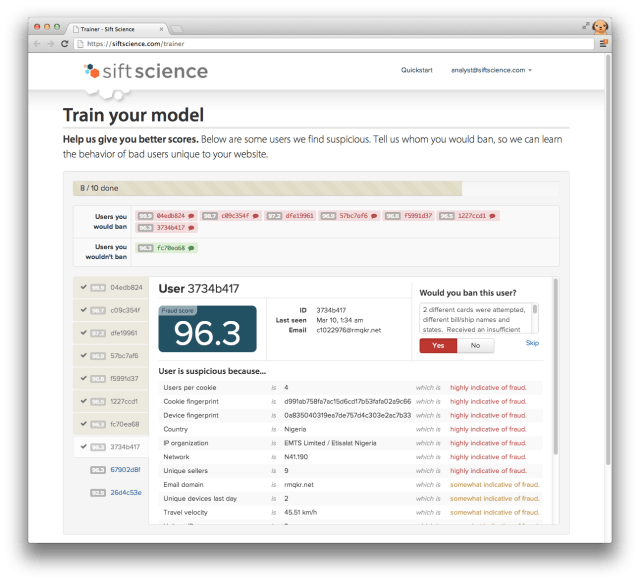 The primary use case for such a tool is to combat the type of fraud which results in chargebacks, but it can also help detect things like scammers who post fake inventory to marketplace sites, or help to identify which accounts on a site have been created by someone committing fraud. The company claims that the system today can detect up to 90 percent of the fraud happening on its customers’ sites and services.

Sift Science has been in private testing with around twenty companies, but it’s not permitted to name all clients at this time. However, Airbnb, Uber and Listia are a few of those early testers, as is Levchin’s Affirm, as well as a couple of marketplaces, payment processors and Top 500 retail websites.

As of today’s public debut, Sift Science is launching as a freemium service, where it charges based on the number of users a website chooses to score each month. Fewer than 5,000 users is free – which makes it the only anti-fraud service with a free tier. Beyond the first 5,000, it’s 10 cents per user per month.

With the additional funding, Sift Science plans to double its head count, currently nine, with hires in sales and engineering. The team will also update its customer-facing online dashboard with more functionality in the future, too.