Salesforce.com released an update to Chatter today that is designed specifically for mobile devices and represents the company’s next-generation CRM platform.

Chatter, the company’s activity stream service that it launched in 2010, now has the capability for a customer to access records, edit them and take action on an account, all from a mobile device. It essentially brings CRM to the customer’s mobile phone, iPad or tablet.

The updated app is now available in the Apple App Store and Google Play.

The app is a significant improvement over the Salesforce.com mobile app, and has one feature that is particularly noteworthy.

Chatter Publisher overlays the Chatter activity stream. Its look is reminiscent of the tiles feature on Windows Mobile Phone and the overall Windows UI. It has six aspects to it as is evident in this screenshot I took during a demo today:

According to Michael Peachey, senior director of solutions marketing at Salesforce.com, a sales person can access and update the account, provide collateral such as data sheets and then use the publishing feature to close the sale. Publisher puts the business actions directly in the feed. A sales person can see leads, opportunities, cases and eventually custom apps developed in the Salesforce.com AppExchange. In addition, a sales person can create groups or assign tasks.

Chatter integrates with work.com. A supervisor can use it to give the sales person a badge for a job well-done in closing the deal.

Publisher is optimized for touch so the sales person can easily do things, such as take notes when assigning a task. 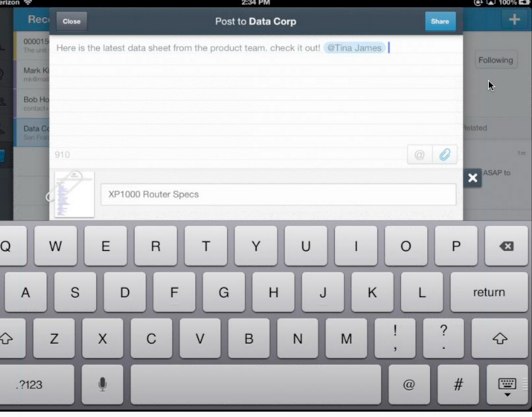 Salesforce.com has strengthened its technology foundation through the development of core pieces it has developed and adopted through acquisition. With its app platform, independent software developers can access the Salesforce.com ecosystem, and in the process fortify the SaaS giant’s place in the market. That strength will grow as it rolls out its identity platform, which launched last year at Dreamforce. It will serve as an authentication gateway for all apps, giving a unfied way for thousands of employees to use a service such as Chatter.

But there is competition and a mountain of challenges. In particular is the continued break up of individual processes that app developers are offering, specifically meant for “mobile CRM.” I wrote about one company, Base, last year that illustrates how these growing startups can challenge the larger players like Salesforce.com.