Being as chiseled as I am is tough. You have to eat right (brownies only every other day), exercise (take the stairs to the attic), and keep tabs on things like your heart rate and body temperature while playing Sim City. That’s why the Basis is one of the best “general purpose” body monitors I’ve seen. The band, which senses your blood flow, body temperature, and perspiration along with steps and motion, is a small, discreet watch-like system that works surprisingly well as a standard pedometer but offers a way to break bad habits and make new ones.

I’m a longtime fan of quantified health devices for the simple reason that they offer immediate feedback on my current activity level and health. I’ve been using Fitbits for as long as they’ve been available and I’ve managed to lose 20 pounds by keeping my activity up and not eating like a slob. The Basis is different in that it offers the same features as a Fitbit but with a few improvements. For example, on the bottom of the watch there is an optical BPM heart sensor as well as leads for perspiration sensing and temperature. Because it is a watch you can wear the device overnight and monitor your sleep habits as well.

The device itself is about one inch on each side with an integrated rubber band. Four spots in the corners activate various features and there’s a central button that is not yet activated in this incarnation of the device. Pressing the right buttons displays steps take, calories, and current heart rate and you can activate the clock or data by pressing the left “buttons.” A sensor turns on the backlight when you move the watch towards your face (this happens intermittently but it works in principle) and you can also turn on the backlight by pressing the left touch button.

As a watch, the Basis is fairly basic and I’d even say sub-par. You can tell the time and the date, but traditional sports functions are missing. Viewing it in low or bright light is difficult and the backlight pops on for a mere five seconds, giving you just enough time to forget what time it is. It lasts about five days on one charge and connects to your computer or charger via a sort of USB-powered “frame” that connects to the watch body. It’s a bit cumbersome but it improves the water-fastness of the watch. 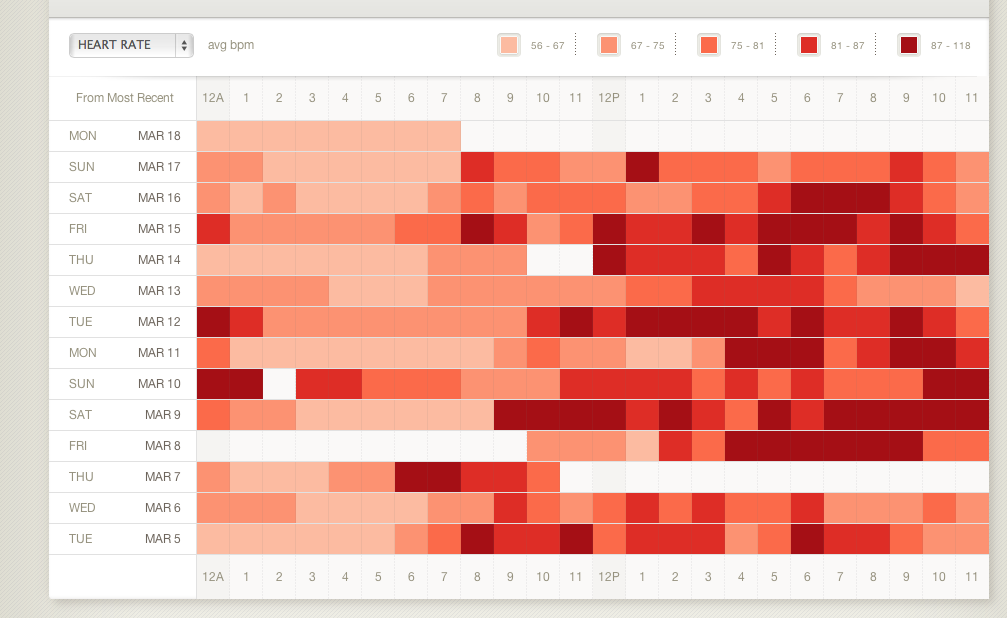 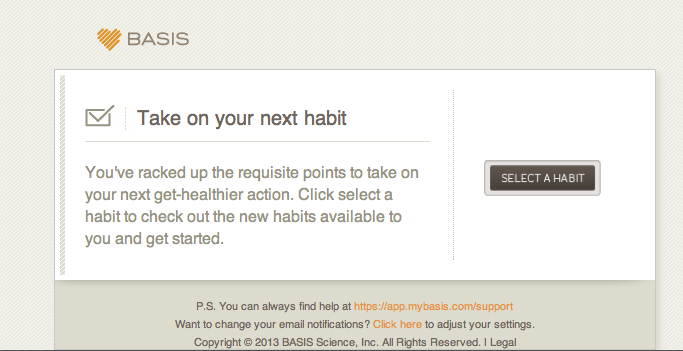 The real magic happens on the back end. The Basis watch syncs with MyBasis.com, a dedicated website for the device, as well as a forthcoming mobile apps for Android and iOS. It is here that the Basis shines – and confuses.

Basis uses the concept of “habits” to motivate you to get off your duff. Some of the habits are simple – one asks you to simply wear the watch – while others encourage you do take a certain number of steps a day or spend a certain amount of time sleeping. You unlock various habits by completing challenges over time and you begin with only a few possible “goals” during your initial set up.

This system is both ingenious and frustrating. While open-ended health devices like Fitbit and the Jawbone Up reward you after you’ve completed a certain number of steps with an email or notification, the Basis forces you through a set of gamified steps to gain your “reward.” It encourages you to visit the website often and unlock new rewards but the rewards themselves are so open-ended that it’s difficult to remember some of them. Unfortunately, the Basis band won’t remind you and the only indication that you’ve hit a certain step count is a little winner’s cup icon at the end of the readout. A bit more info – “You completed the Sleep For Eight Hours Challenge” – would be immensely helpful.

The system also offers a number of interesting graphs including comparative activity and “heat graphs” of your various vital statistics. You can, for example, see when you tend to sweat the most (I found sweat when I eat) and when you tend to wake up. “Insights” offer little snippets of information about your day including sleep quality and the like.

Being a watch nerd I usually wear the Basis on my right hand and a real watch on my left. Because the watch is fairly small and dark it looks more like a Fuel Band or an Up than a Timex. I think that depending on this watch as a daily wearer would get immensely frustrating and I wouldn’t recommend it.

However, as a window on your body it is superior even to my beloved Fitbit and I’d say it’s even better than the Up. Simply having my heart rate available at all times is a valuable bit of data and the step counter is as accurate as the Fitbit in most situations. The Basis is obviously bigger and more conspicuous than other devices, but the battery life and form factor make it a slightly superior choice if you’re willing to wear it on your wrist all the time.

The market for quantified health devices is definitely huge and entrants like Basis keep pushing the envelope further and further. The B1 seems like a strong first try, and the company expects to release firmware upgrades that will add more functionality to the watch over the next few months. The ability to pair the watch with a mobile app is also a much-needed addition as the syncing system is a bit wonky via USB.

For $199, I think this band gives most any other health device a definite run for its money and I’d even recommend the Basis over more complex offerings by Suunto and Polar. Rather than making a kitchen-sink sports watch, Basis has produced a cool, streamlined monitoring device that is, for the first time in the space, eminently usable and promises some interesting potential.