Ditching HTML5 cost Facebook the flexibility to tinker and quietly try out design or feature changes on subsets of users. But now it can experiment again. Thursday Facebook launched a beta club offering some Android users early access to new features. Thanks to silently downloaded software updates, Facebook can field test evolutions of its mobile experience so it doesn’t screw up for hundreds of millions of people.

Between hackathons, lock-ins, and constant code pushes, experimentation is core to Facebook’s product development. It designed the system Gatekeeper so it could simultaneously test tons of different versions of Facebook on tiny fractions of its userbase. New features are often tested in remote areas like rural New Zealand or on specific demographics like people with few friends to pull in feedback without alerting the public.

If initial tests go well, Facebook pushes changes to 1 percent of users and monitors for bugs, qualitative feedback, and usage fluctuations. When an update proves stable and popular, it’s rolled out to 10 percent and eventually 100 percent of users. This lets its miasma of services on the web evolve intelligently. 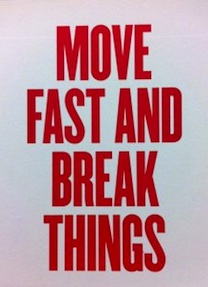 That’s not how it works on mobile. Typically with native apps, updates go out to all users at once in the form of software downloads manually pulled from the App Store or Google Play. That means everyone gains access to new features at the same time, and it’s harder to gauge impact without changing everyone’s experience for better or worse.

Facebook worked around this by wrapping HTML5 pulled live from its website within its iOS and Android apps. HTML5, while flexible, wasn’t fast enough to satisfy Facebook’s hundreds of millions of mobile app users. Switching to a native infrastructure doubled the speed of its apps.

When the quicker iOS app launched, Facebook’s iOS mobile product manager Mick Johnson told me, “We deliberately made a trade off to get to scale. We used HTML5 to test and try things out.” In a Facebook engineering blog post, Jonathan Dann wrote “We chose to use HTML5 because…it allowed us to iterate on experiences quickly by launching and testing new features without having to release new versions of our apps.”

Mark Zuckerberg had recently announced onstage at TechCrunch Disrupt that too much dependence on the mobile web standard before it was ready was one of Facebook’s biggest mistakes. However, backtracking on HTML5 robbed Facebook of some ability to experiment. One way Facebook made up for it was testing through its standalone apps. More popular amongst early adopters than its main apps, Facebook tries out features like audio messaging and bulk photo uploads in its Messenger and Camera apps. Those that are well-liked graduate into features in its flagship mobile products.

Break Things (For Some)

Now thanks to silent updates, it can meddle with its most popular app, Facebook for Android, which had 192 million monthly users at the end of December. Thursday it prompted some users to download Facebook for Android version 141046 and opt in to early access to beta features, as first reported by Liliputing. This update is only available to some users who’ve enabled a setting on their Android to install apps from outside of Google Play. Those who oblige silently download beta updates over Wi-Fi from then on. Beta testers do have to manually confirm installation of the updates, though. If Facebook thinks all its users would benefit from a beta feature, it pushes a standard Play update to everyone. 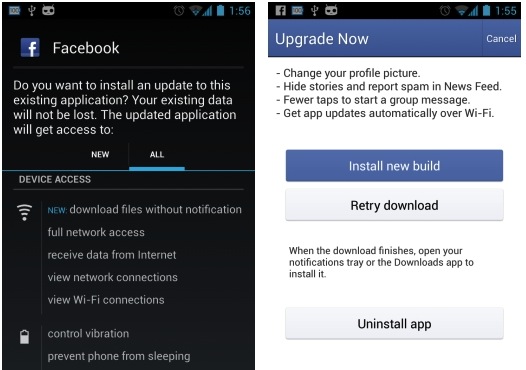 It all works a bit like BlackBerry’s Beta Zone. The silently downloaded updates are one of the bonuses of Android’s less restrictive ecosystem for developers. Facebook could potentially do something similar on iOS, but that would require a clumsier system like TestFlight where users have to manually drag in updates. This article isn’t meant to say Facebook ever stopped experimenting on mobile. It moved to updating its apps every two or four weeks. It just couldn’t do so as stealthily.

The new beta club could be an exciting opportunity for some hardcore Facebookers. After all, we’re living in a world where having the newest apps or technology can make you seem cool like knowing about underground bands used to.

I frequently see people asking for how they become guinea pigs for Facebook. The company has only offered limited opportunities to volunteer for testing in the past. It requested test subjects for its since-scrapped Questions product to get it off on the right foot, and previously accepted applications to become a beta tester, though it no longer does. Now there’s a clear route to be the first on your block with the next Facebook features: get an Android and enable sideloading app updates.

Facebook is striving to redefine itself as a mobile company. Yet it’s still pushing major changes to the web first, including the recent launches of Graph Search and the redesigned news feed which have both yet to emerge on iOS or Android. To avoid disruption by nimble startups that are truly mobile-first, Facebook will need to continue aggressively iterating on its apps. Luckily now it’s found a new way to fire up the bunsen burners and cook us the future of social on the small screen.