Y Combinator-backed BuildZoom, a new service to help homeowners find licensed contractors to help them with their remodeling projects, is today making its public debut. The startup’s database now contains every licensed contractor across the U.S. – over 2.5 million of them. Users can search this database, drilling down into categorized contractor profiles which are enriched using government data from state licensing boards, Better Business Bureau ratings, and more, as well as customer reviews.

The company was founded by Jiyan Naghshineh Wei, formerly a product manager at Vocus, and David Petersen, who previously founded ImportGenius, a shipping database, another company built on top of public data.

“We were looking at other ways we could use government data, and we realized we could use it to seed the community of homeowners and contractors,” Petersen explains, describing the inspiration for what is now BuildZoom. He and Wei are also homeowners themselves – Petersen owns some rental properties, as well – giving the founders an even more personal motivation to build a tool that addresses this market.

Consumers can visit BuildZoom to find out whether a contractor is licensed, what class of license they have, the year they were licensed, whether their license has ever been suspended or there’s been a compliant against them, whether they’re bonded or insured, and more, depending on their own state’s requirements.

All of this is public data, but states tend to be bad at sharing that information with consumers. “There’s all this really important data that’s out there to protect consumers, but there was this big obstacle between doing all the regulatory work, and having consumers access that information,” Wei explains.

In addition to licensing and other regulatory data, BuildZoom is also starting to augment its contractor profiles with information from the Better Business Bureau (BBB). However, it doesn’t yet have this information for all contractors nationwide because the BBB has regional chapters which have to be brought on board individually. Today, BuildZoom has data for around 10 percent of the U.S. market, including places like Phoenix, Boston, Columbus, Pittsburgh, and Rhode Island, for example, but not regions like L.A. 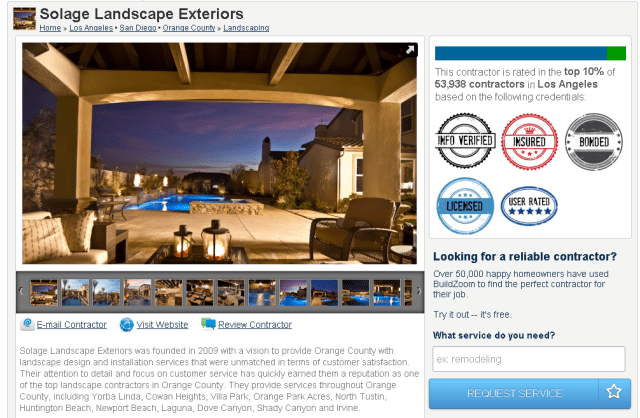 Of course, when it comes to finding reliable contractors, BuildZoom has a big-name competitor it will have to take on to gain traction: publicly traded Angie’s List. In order to make its service more appealing to homeowners, the startup is forgoing the subscription-based, members-only model that Angie’s List uses, and is instead offering free access to its database and user reviews to all homeowners and contractors alike.

The company plans to monetize by offering services to the contractors themselves, including the opportunity to buy paid advertisements on the site, and it will offer to design websites for its contractor customers, too. Notably, unlike competitor HomeAdvisor, BuildZoom won’t charge contractors for lead gen and referrals. During its beta period, the company signed up around 20,000 contractors who have already personalized their profiles by adding additional information, which in some cases includes photos of their work.

The site also features a Q&A section where people can ask questions about remodeling projects, which contractors can respond to. This is another differentiating feature for BuildZoom, says Wei, because contractors will write high quality answers here, giving the consumers more of an idea what that contractor is like. “What [homeowners are] looking for is not just a good contractor,” says Petersen, “they’re looking for a good businessperson, because that person will fulfill everything they promise to do.” The answers are meant to help with that (though some SEO boost couldn’t hurt either).

During its beta trials, BuildZoom grew to 20,000 unique visitors per day, reaching nearly 500,000 per month, and nearly 1,000 contractors are claiming their profile on the site each week. Homeowners across the U.S. can now visit BuildZoom to search for contractors in their own zip code, read reviews and ask questions. 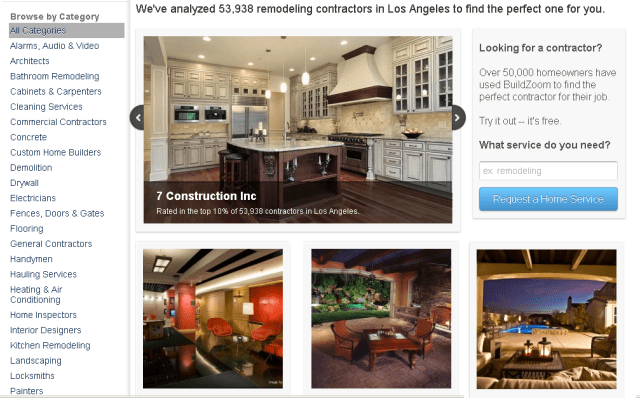