As we reported last month, Microsoft decided to start migrating its old-school Hotmail users over to its shiny new Outlook service. That migration process might not be going so well, as users have flooded sites like Twitter with reports of downtime to the tune of three hours. Its migration approach was to be a slow one, with the move being optional at first.

Regardless of the reason, three hours is a long time to not be able to check your email. Upon visiting the Outlook status site, the message looks grim, but doesn’t call it a full outage, with Outlook and SkyDrive being affected as well: 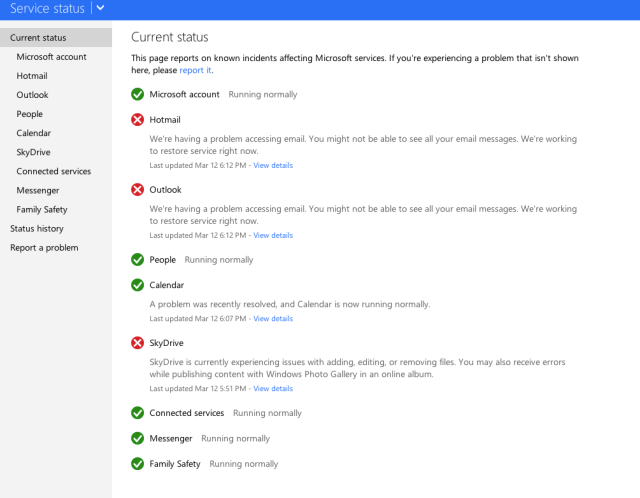 The Hotmail and Outlook issues are described as an issue with displaying all of your emails, while SkyDrive is having file-editing problems. These are important features for these products, obviously. The status site also shows that a Calendar issue was recently resolved, with the only details provided being that the issue had to do with “maintenance.” Perhaps this was the migration that we were all waiting for. Oops.

Depending on who you ask, it sounds like the entire suite of Microsoft-cloud products aren’t acting as they should. Popular site DownRightNow reports the issue as a “likely service disruption.”

We’ve reached out to Microsoft for comment and will update our story upon hearing back.

UPDATE: Here’s the statement that we’ve received from a Microsoft spokesperson, that says the problem is affecting a “small number of customers,”: