Pinterest has started rolling out Pinterest Web Analytics, a tool that will allow businesses to see how many visitors the content-sharing service is referring to their sites. The first feature, which shows data on how many people have pinned from a site, the number of views each pin has, and how many users have visited a site from Pinterest, is available for free today for companies with a verified Web site. 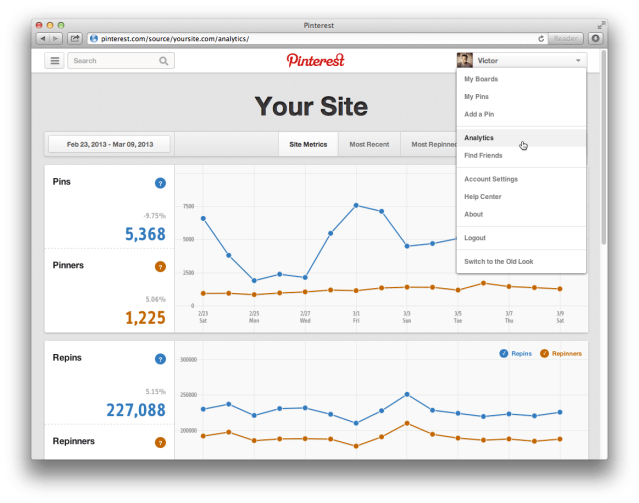 These new features make good on Pinterest’s promise to businesses late last year that it will introduce data analytic tools for companies to track Pinterest traffic. Pinterest, which began offering official accounts for companies in November, is focusing this year on “building foundations to monetize,” founder Ben Silbermann told the Wall Street Journal last month. The Web site does not currently have paid ads, but it’s looking at a potential advertising system, as well as working with businesses to learn how Pinterest can result in sales of merchandise, a potential revenue source for the site. Pinterest recently updated its site for business owners, which includes case studies from companies including Etsy and Allrecipes.

Other features Pinterest may unveil later this year include “suggestions” for users based on what they have already added to their boards. The company also plans to launch international sites this year.

Despite its current lack of revenue, Pinterest raised a whopping $200 million last month from investors including Andreessen Horowitz and Bessemer Venture Partners, in round that put the company’s valuation at $2.5 billion. The Web site has already shown that it is a potent marketing tool for businesses. Last July, data from online sharing service Shareaholic showed that Pinterest beat Twitter, StumbleUpon, Bing, and Google in referral traffic. Furthermore, Pinterest users don’t just click over to e-commerce sites to ogle merchandise–they are 10 percent more likely to make a purchase than people who come over from other networks, according to data from e-commerce platform Shopify.