Desire2Learn, the online learning platform based out of Waterloo, Ontario in Canada that raised $80 million in September 2012, is stepping up to the M&A plate. Today, we’ve learned, and confirmed, that the company is making its second acquisition in as many months by buying Wiggio, a collaboration platform for students.

The companies are not disclosing the financial terms of the deal, but what we do know is that the ten-plus-year-old Canadian learning company is looking to expand its foothold in the U.S. higher-ed market. Wiggio is based in Boston, which is a key hub for the e-learning market, but not because it’s a big college town or anything. (Just kidding, it has 35+ colleges and universities, more than one of which is a Desire2Learn customer.)

Acquiring Wiggio means that Desire2Learn doesn’t have to start from scratch in the market and allows it to open a Boston office. Accordingly, employment offers are being made to all six Wiggio employees, who (for those who accept) will remain in Beantown and help to open Desire2Learn’s new office.

We’re also hearing that the company is building itself up south of Canadian border also because it is eyeing up an eventual IPO in the U.S.

Exits in the ed-tech market are also significant for another reason: A ton of ed-tech startups, some with great ideas but pre- meaningful revenue, have received seed funding, but it’s been a struggle for many of them to raise Series A and B rounds — an amplification of the larger issue for many startups. In many cases, investors just aren’t that interested in putting big money in these companies right now, so in most cases the best (or only) option for them is to get acquired.

A final decision has yet to be made on whether Desire2Learn will integrate Wiggio’s technology into its platform and begin offering it to schools. For those unfamiliar, as Sarah wrote last April, Wiggio set out to build the “anti-SharePoint,” providing schools with a social and collaboration network for groups associated with educational institutions, which can range from math clubs to sports teams and sororities. 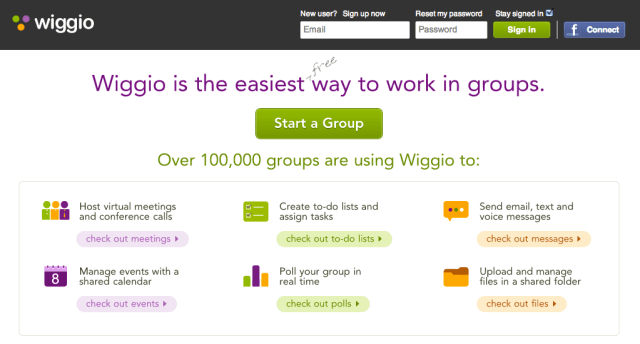 In other words, Wiggio aims to provide schools with the same kind of easy-to-use collaboration tools that services like Box, Yammer, WebEx and Basecamp offer to businesses — like the ability to hold virtual meetings through web conferencing, share calendars and files, create documents and study plans, or chat and video message fellow students about tonight’s homework assignments, for example.

While plans for integrating Wiggio are still up in the air, Desire2Learn Market Development VP Jeff McDowell tells us that Wiggio’s platform will continue to operate as a stand-alone service for the foreseeable future, which means that Wiggio’s 1.1 million users and 100,000 collaboration groups won’t be forced to begin looking for a new home next week. No imminent shut down.

Wiggio has raised $2.55 million from New Atlantic Ventures, Bob Doyle and angels. It was founded in 2008 by Dana Lampert, just after he graduated from Cornell, and influenced by all the enterprise collaboration tools he’d come acros while during a past Wall Street internship. Lampert is currently the CEO.

The Wiggio deal is Desire2Learn’s second acquisition in as many months, following on the heels of its purchase of Degree Compass in late January. Backed by The Gates Foundation, Degree Compass offers a predictive analytics tool, which, like Netflix’s recommendation engine for movies, helps students find classes, courses and subjects that fit their interests, skills and grade level and help them move towards their degree.

The service also allows schools to get a better sense of how well their students will perform in particular subjects through its grade prediction system, which, in early testing at several pilot schools, has been able to predict whether a student will pass the class with 90 percent accuracy based on their prior performance. And not only that, but can distinguish whether or not a student will get an A, B, C, D or F grade — with 92 percent accuracy.

McDowell tells us that Desire2Learn will be going to market with Degree Compass in the next month, with a version that’s very close to the one it acquired.

So, whereas Degree Compass solves an immediate market need for Desire2Learn and its institutional customers and is being implemented right away, Wiggio’s technology isn’t in as high demand given the company’s current services, which makes its long-term future a little more uncertain.

It is clear, however, that, since its $80 million raise in September from New Enterprise Associates and Omers Ventures, Desire2Learn has been looking to become an acquirer in EdTech, and its hiring of McDowell, who previously helped lead platform marketing and business development at fellow Waterloo resident BlackBerry, is another demonstration of that. 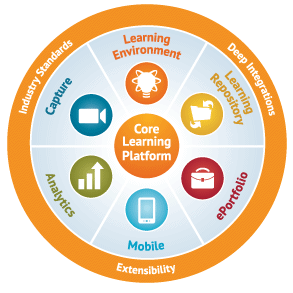 The $80 million round, the largest to date for a Canadian tech company (and one of the largest ever made by NEA), was raised to help Desire2Learn invest in customer service and cloud infrastructure, platform development and global growth, i.e. acquisitions. Since launching in 1999, Desire2Learn has bootstrapped its way to a Learning Management System (LMS) that competes with the bigs (and incumbents) in the space like Blackboard and Moodle.

In fact, the company spent the first three or so years of its life mired in patent-related litigation with Blackboard. At the time, using litigation was not an unfamiliar approach for Blackboard in dealing with competitors. Although the battles dragged out for years, Desire2Learn was able to come out the other side with just enough capital and steam to begin building. Today, Desire2Learn has over 700 clients and over 8 million learners across higher education, K-12, healthcare and the corporate sector.

And it has over 600 employees worldwide, which it hopes to expand to 750 by the year’s end (partly inorganically, it seems). Although the company does not disclose financial information, we’ve been hearing that its institutional contracts with its customers are translating into millions of dollars of revenue — a relatively rare thing in EdTech.