Tango, the mobile video calling and communication service backed by $87 million in outside funding, is announcing today that it has reached 100 million registered users – up from 75 million in November. To celebrate the news, the company is also rolling out a native iPad version of its application, which will now support high-resolution video calling.

In November, Tango CEO Eric Setton told us that the company was seeing the network effect getting stronger as it grew the service, and now he says that Tango has reached critical mass. Though Setton declined to provide metrics regarding active users, he said the numbers have been keeping up with registrations and haven’t changed much as Tango has grown. To give you an idea, in spring 2012, 10 percent of Tango users were active daily, and 44 percent were monthly actives.

The app is currently available in 212 countries worldwide, and localized in 39 languages. The Android version is helping with its growth, too, as the app has ranked No. 12 or No. 13 in overall most downloaded apps in over 35 countries where Tango has a presence, says Setton. But the U.S. is still the top country for Tango, accounting for over 40 percent of its user base.

But Tango is still a bit behind a few of its competitors in the messaging and communications space: Viber just passed 175 million users this February; WhatsApp has around 250 million users; and Skype has some 800 million, 280+ million of which are active monthly. Meanwhile, LINE, popular in Japan and newly arrived in the U.S., also reached 100 million in January.

In the U.S.and Western Europe (see below images*), where Tango is most popular, the market is still led by Facebook Messenger and Whatsapp, however. 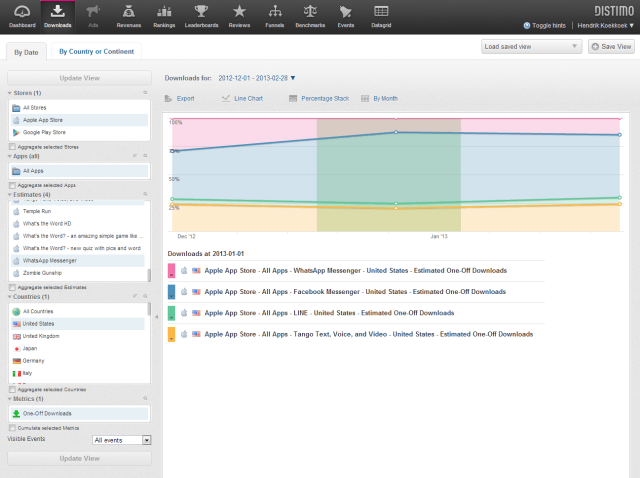 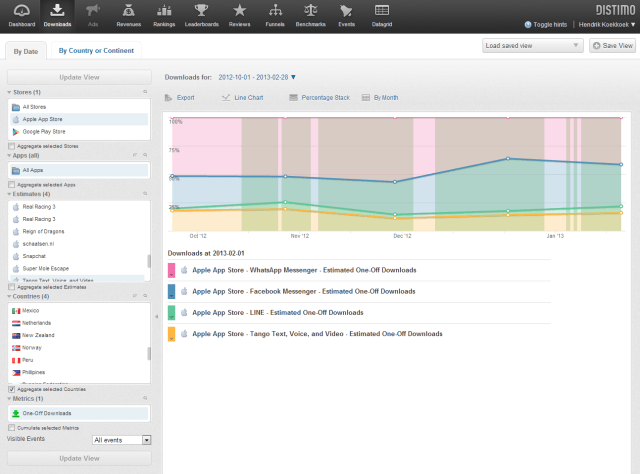 The app’s ongoing traction comes at a time when there’s a shift underway in terms of how people communicate on mobile. People now have more options to connect besides making a phone call. Many today prefer to send texts or pictures, something which Tango’s app also supports. It also supported video voicemails nearly a year before Skype announced the option – just last month in fact. 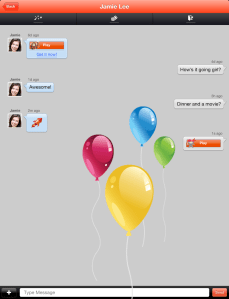 But Tango sees itself today as more of a social network than a communications application. The messaging – whether voice, video, pictures, or even, more recently, games – is just the activity that takes place between the family, friends and significant others who use Tango to connect. These are the top three user demographics for the app, which is often used between loved ones communicating at a distance. You can also infer its popularity with kids and teens, given that around 10 percent of users are on iPod touch, and send double the amount texts than those on other platforms.

Unlike mobile operators, which charge for texts, Tango currently monetizes through in-app purchases for things like avatars, decorations it calls “Tango Surprises” and games, the latter which were first launched in September 2012. Today, the company is adding its seventh game to the platform, and Setton remarks that there are now a million games played per day on Tango.

“When you think about it, that’s bigger than most of the games that are present in the App Store other than the very, very top spots,” he says. “That’s something we feel pretty good about. Games are one of these activities where you don’t need to have something in particular to say to the other side when you’re playing with them and engaging with them,” he adds. “But it captures a meaningful interaction.”

The company is also improving its selection of Tango Surprises – specifically making a wider selection of these free. Before, only a few were free, but now around 30 (one per pack) will be. There are some 150 animations to choose from, many from well-known, family-friendly brands like American Greetings, Sesame Street, Strawberry Shortcake, Pink Panther, Care Bears and others. Though that kind of content might not make much sense for communication between adults, it’s a popular choice for the prevalent chats between parents and grandparents and younger kids. 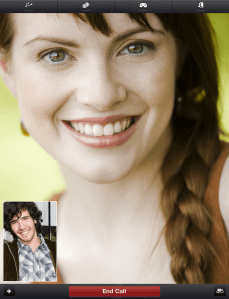 Setton declined to provide revenue figures these add-ons bring in, noting only that they’re growing. And Tango is not yet profitable.

But of course, the biggest product news is native iPad support. Adding Kindle Fire to the mix may be next on Tango’s roadmap, given that it’s now iOS and Android phones and tablets. Setton won’t confirm details, but agrees that Amazon has “very interesting volume” and “stands out in that space,” referring to the family-friendly nature of how Kindle Fire is specifically marketed towards those with younger children.

Longer-term, the idea is to push Tango further into emerging markets. Outside the U.S., it’s mainly popular in developed markets in Western Europe and Asia, because it started as a video-calling app.

“In places where you have low-end Android smartphones – there’s certainly an opportunity,” says Setton. “If you look at Facebook’s strategy in emerging markets it was to have something very lightweight that could even work on the WAP service. I don’t think we can quite get there, but it’s certainly very intriguing.” He notes however that Tango has “no immediate plans” for emerging markets, but thinks they’ll be important to address in the future.

Tango, now for iPad, is available here in the iTunes App Store and in Google Play.

* Image source Distimo. Methodology: Distimo AppIQ provides download and revenue estimations for any app worldwide, based on daily sampling of transactional app data (>2.6 billion downloads / quarter) and publicly available information. When calculating downloads and revenues for individual apps, Distimo’s methodology excludes that app’s transactional data from the analysis to preserve the confidentiality of their users’ data.