Real-time creative collaboration startup, Scoot & Doodle, which piggybacks on Google+’s Hangouts feature as the arena for its learn-through-play app aimed at middle school age through to college students, has closed a $2.25 million seed round. The investment comes from unnamed Silicon Valley angels and educational publishing giant Pearson.

Scoot & Doodle said the funding will be used to expand its user base and extend its reach across “multiple devices”, including mobile. It also plans to beef up its team with new hires, and continue work on its cross-device platform. A company spokeswoman told TechCrunch Scoot & Doodle currently has an iPad app in development, and is working on developing data portability across devices. 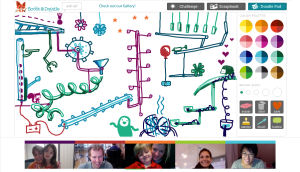 Scoot & Doodle’s first product, a Google+ Hangouts app, launched about a year ago. The company said it has gained strong user engagement, noting that first-time users spend an average of 25 minutes per session, and returning users spend 32 minutes+ per session. The startup has more than 875,000 followers on Google+ but the spokeswoman said it does not break out user numbers for its app.

Although the Scoot & Doodle app resembles social games like Draw Something, the startup talks up the educational side of its social collaboration app — noting how school kids and students “use the product to play with ideas, create stories, draw, discuss, and solve problems together”. It’s this educational element that has clearly attracted publisher Pearson to the table to chip in to the seed round. Pearson’s recent strategy to diversify its traditional publishing business focus and ramp up its digital efforts has involved experimenting with edtech initiatives. Just last month it launched an incubator program for edtech startups which it could partner with on pilot projects.

Scoot & Doodle is a real time, social creativity platform where friends and classmates get creative together face-to-face, practicing critical 21st century learning and innovation skills. Students from middle school through college use the product to play with ideas, create stories, draw, discuss, and solve problems together. The company introduces a fun way to have creative jam sessions, anywhere, anytime, and provides endless opportunities for informal and formal learning through its mix of peer collaboration, social community and open-ended design.

“At Scoot & Doodle, we believe play is an inseparable part of learning. This informs all of our product designs. We are committed to putting the power of social creativity in the hands of people young and old to inspire playful interactions that foster new ways of thinking,” said Christine Egy Rose, CEO of Scoot & Doodle. “With the support of our investors and Pearson, we’ll reach students, teachers and families through their unparalleled distribution to the K20 community.”

Funding will be used to further expand the company’s user reach and deploy its platform across multiple devices, including mobile. Scoot & Doodle also plans to add top talent to the team and continue work on its cross-device platform.