Kids app maker Toca Boca, which operates like a startup out of the 200-year-old Swedish publishing company Bonnier, is making good on its earlier promise that it will soon begin to expand its product portfolio through acquisitions. Toca Boca is today announcing an all-cash deal with Toronto-based studio zinc Roe that includes its line of children’s apps.

Toca Boca CEO Björn Jeffery explains that his company is not actually acquiring zinc Roe outright, because it has some co-publishing deals with others that Toca Boca was not interested in inheriting. Those will continue under the zinc Roe brand, but will no longer be worked on or actively developed. Instead, the deal with zinc Roe was specifically for its 10-app “Tickle Tap” app series, aimed at those ages 2 to 4, as well as the studio’s 10-person development team. 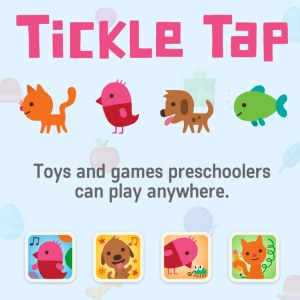 Terms of the deal are not being disclosed, but the new members of Toca Boca will continue operations out of their Toronto offices. Former zinc Roe founder Jason Krogh will become CEO of the new studio, which will be called Sago Sago. Though the company’s Tickle Tap apps will now come under the Toca Boca brand, they will not be rebranded “Toca Boca” following the acquisition. However, they will be getting a makeover in the months ahead and relaunched, says Jeffery.

“We’re going to polish them up, make them universal, and there will be some changes in interaction and scope,” he notes. In addition, the Toronto Sago Sago team will also begin work on a Sago Sago-branded app series, which will be aimed at slightly older children (5 or 6 and up), which will involve more complex interactions, playing around the device’s camera and “unexpected outcomes”, Jeffery hints.

He says that zinc Roe’s product and team are a good acquisition for Toca Boca, because they shared a similar vision. “It was a good cultural fit. The apps follow a lot of the values that Toca Boca has, focusing on a graphical consistency, having an interesting brand, focusing on creativity, and doing it in a family friendly way,” Jeffery tells us. “They don’t use aggressive in-app purchases and no big advertising for other apps, similar to the Toca Boca apps.”

Toca Boca, which has 17 apps aimed at young children, only offers a couple of free applications, choosing to instead charge somewhere between 99 cents and $2.99 for its creations. It’s a decidedly less-spammy way to do business, which has earned it a good reputation in the kids’ app space. And those values are paying off. In less than two years, the company has now reached over 30 million cumulative downloads for its apps, up from 22 million in December.

Going forward, Toca Boca plans to continue its expansion through acquisition, going for a “multi-brand approach.” Jeffery says that a few discussions are underway with other companies, too, but for the time being the focus is on getting its two studios running in parallel.