Back in November, Basis officially took on Jawbone, Nike, Fitbit and the fast-expanding cohort of startups developing health tracking devices, releasing its long-awaited health-monitoring wristwatch. Capitalizing on the popularity of the Quantified Self Movement, the $200 sensor-happy Basis band and its accompanying web dashboard allow novices and fitness enthusiasts alike to easily track everything from their activity and skin temperature to heart rate, calories burned and sleep patterns.

The initial consumer demand for the mobile health tracker has been high, Basis CEO Jef Holove tells us. With the added publicity around its public launch in November, the startup’s pre-order wait list grew “well into the five-digit range,” he says, forcing Basis to shut down its “store” and tell customers it had sold out of its first batch, as it scrambled to fill its initial orders. Today, however, Basis is getting some help in that regard, announcing that it has raised $11.5 million of fresh funding to help it accelerate production, distribution and beef up its team.

The series B round was led by Mayfield Fund and included contributions from the startup’s existing investors, including DCM and Norwest Venture Partners, and brings its total investment to just over $20 million. As a result of the round, Mayfield Fund Managing Director Tim Chang (a long-standing Basis supporter who has led investments in companies like ngmoco and Playdom) will be joining the startup’s board of directors.

“Basis’ differentiated approach to health and wellness was what led me to invest in the company in the first place, and that remains true today,” Chang says. “No other health tracking device has been able to pack as many sensors into a wearable package, particularly its ability to track heart rate from the wrist, or created a healthy habits system that actually keeps people engaged over time.”

Over the last year, the market for health tracking gadgets has become increasingly active (read: crowded), as startups look to capitalize on the growing consumer interest in mobile health and wellness devices that help them lose a few pounds, burn more calories or just get a better night’s sleep. And, to the startups credit, the market is finally producing products that people are no longer embarrassed to be seen wearing in public.

Traditionally, wearable health tracking devices have been supported by a core group of rabid fitness enthusiasts and geeks, but as the cost of censors (and the underlying technology as a whole) has come down, so has the price, which is beginning to give these devices real mainstream appeal. As the space heats up, Basis is looking to distinguish itself from the competition by not only offering a greater array of sensors and a deeper web analytics product than the next guy, but by seeking out the support of industry veterans and big-name advisors.

In conjunction with its new round of funding, Basis also announced today that it has added the well-known healthy living expert, Deepak Chopra and long-time healthtech investor and analyst, Esther Dyson, to its advisory board.

For those unfamiliar, Chopra is one of the most well-known (and controversial) practitioners of alternative medicine in the U.S. He has published more than 65 books, and currently serves as a fellow of the American College of Physicians and as a professor at the Kellogg School of Management. Esther Dyson, in turn, is an active and prolific angel investor, entrepreneur and speaker, focusing particularly on healthcare and health technology. She was one of the early proponents of the Quantified Self Movement and has invested in companies like 23andMe, Genomera, HealthTap, HealthRally, Keas, Omada Health and Voxiva.

With its new capital and support from Dyson and Chopra, Holove says that Basis will look to beef up its supply chain, from ramping up production and development to expanding the amount of products it ships each week. Beyond its sensors, the key to the Basis experience is its “Healthy Habits” web dashboard, which aim to help users move toward their goals incrementally, catering not just to fitness enthusiasts, but to busy people who don’t have time to run a marathon every day of the week. The idea is to enable people to break their health goals down into flexible, micro-benchmarks that make it easier to build momentum as they work towards their goals. 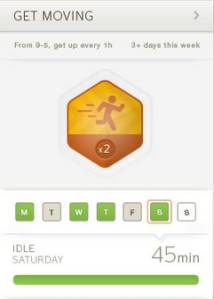 As we wrote at the time, the platform allows “users to choose the healthy habits that work best with their lifestyle,” offering ten different habits that “aim to gradually increase user activity (or sleep) … and automatically adjust to the frequency or target of a user’s chosen habit at the end of each week, basing that calibration on their performance from the week before.”

Holove says that he wants to leverage the Healthy Habits platform to do more and that Basis is just scratching the surface on this front and in terms of user engagement and interactivity, so the startup will be looking to ramp up hiring in their hardware, cloud service and software teams.

Another part of the startup’s roadmap, and really a critical element of creating a sticky user experience, is mobile. The startup is currently working on an Android app that is slated to launch later this month, with an iOS app to follow close behind. Adding mobile apps will allow users not only to see their health data and track habits on-the-go but allow the device to wirelessly sync with its dashboard and create more unique and engaging feedback loops.

Basis has been off to a great start, and while there are still some kinks to iron out and the device itself is still in serious need of more customization options, it’s got a lot to recommend it even this early in the game. That being said, with the recent news that Fitbit is raising $30 million at a $300+ million valuation, it’s not the only one capitalizing on the growth of the health tracking space. And the competition is only going to get more intense.